Starts at 60 Daily Joke: Three men are talking at a bar 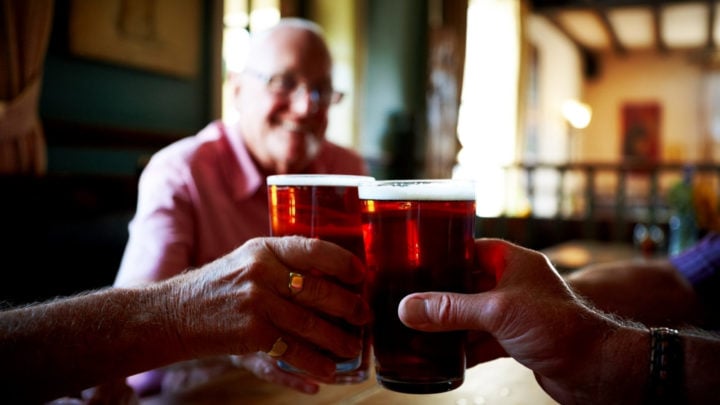 The three men are talking about their wives. Source: Getty.

Jim and his two friends are talking at a bar.

His first friend says: “I think my wife is having an affair with the electrician. The other day I came home and found wire cutters under our bed and they weren’t mine.”

His second friend says: “I think my wife is having an affair with the plumber, the other day I found a wrench under the bed and it wasn’t mine.”

Jim says: “I think my wife is having an affair with a horse.”

Both his friends look at him with utter disbelief.

“No I’m serious. The other day I came home and found a jockey under our bed.”

An old lady is rocking away the last of her days on her front porch, reflecting on her long life, when all of a sudden a fairy godmother appears in front of her and informs her that she will be granted three wishes.

“And, gee, I guess I wouldn’t mind being a young, beautiful princess.”

She turns into a beautiful young woman.

“Your third wish?” asks the fairy godmother. Just then the old woman’s cat wanders across the porch in front of them.

“Ooh… Can you change him into a handsome prince?” she asks.

And suddenly there before her stands a young man more handsome than anyone could possibly imagine. She stares at him, smitten. With a smile that makes her knees weak, he saunters across the porch and whispers in her ear: “Bet you’re sorry you had me neutered.”

Bud and Jack were walking along the railroad tracks. Bud saw a man’s leg. “I think that’s Bill’s leg,” he said.

Then they saw a body. “I think that’s Bill’s body,” said Jack.

Walking on, they came to a head. Bud picked it up and started shaking it.