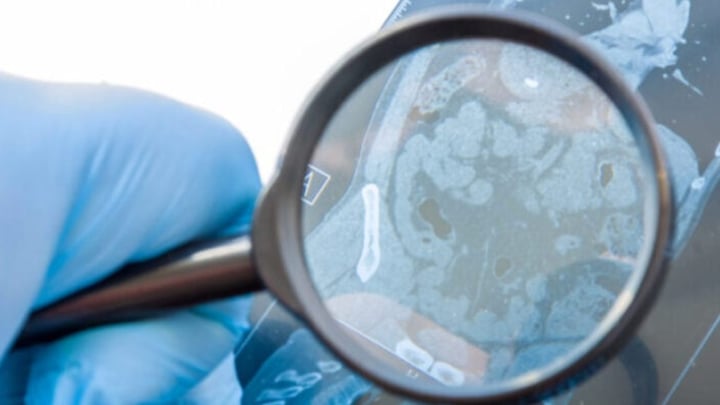 A team of international researchers has identified what they deem “born to be bad” colorectal tumours in those with early stage cancer, in what is believed to be the first time such tumours have been identified in such early stages of the disease.

Researchers from Monash University, CRUK Beatson Institute in Glasgow and Queens University in Belfast made up the study team and found a feature of early stage colorectal tumours, known as TGFβ signalling, in mice and humans as part of the Epithelial TGFβ engages growth-factor signalling to circumvent apoptosis and drive intestinal tumourigenesis with aggressive features study.

TGFβ signalling, is active in tumour cells and is extremely tumour-promoting and in the study’s case predicted how aggressive, resistant to treatment and lethal the cancer was/is.

Prior to the latest study, the pathways that identified such “bad” tumours were only able to be identified in the late stages of cancer.

“This suggests tumour cells with ‘aggressive potential’ are pre-programmed from an early stage or ‘born to be bad’, rather than acquire these qualities over time,” Flanagan said.

“This challenges how we typically think about cancer progression, but also how and when to treat patients.

“We looked at patients diagnosed with early-stage (Stage I) colon cancer and noticed those who would go on to relapse had high levels of TGFβ signalling in the tumour epithelium.

“TGFβ is a cytokine that normally prevents cells from growing out of control. In other words, it’s a tumour suppressor, especially in early stages of the disease. But if the cancer mutates to become insensitive to TGFβ, then TGFβ ends up behaving as a tumour promoter.

“We showed that tumour cells with active TGFβ signalling stimulate additional growth-promoting pathways, exposing an Achilles heel which we can exploit with targeted therapies.

“Collectively, our findings have major implications for the prognosis and therapeutic management of colorectal cancer.”

Colorectal cancer, also known as bowel cancer, is the third most commonly diagnosed cancer in Australia and the second leading cause of cancer-related death.

The Cancer Council highlights that “while the exact causes of bowel cancer are not fully understood, there are a number of factors that are associated with an increased risk of developing the disease. Some risk factors can be modified, and some cannot”.

“Genetics and a significant family history of cancer can play a role in causing cancer. Lifestyle factors can also affect a person’s risk profile. These include smoking, being overweight, eating too much red meat or processed meats, and drinking alcohol,” the Cancer Council said.

Given that symptoms can not present in the early stages of the disease, the need for early intervention and regular testing is crucial.

The National Bowel Cancer Screening Program aims to reduce death and illness from bowel cancer by detecting the early signs of the disease.

The Cancer Council said that “if detected early, over 90 per cent of bowel cancers can be successfully treated”, highlighting the importance of regular testing and early intervention for a greater chance of being treated successfully.

“Of the 5.7 million people invited to screen in the National Bowel Cancer Screen Program from 2018- 2019, almost 2.5 million (43.5%) participated. If screening participation rates increase to 60%, modelling by The Daffodil Centre shows that 84,000 lives could be saved by 2040,” the Cancer Council said.