‘Why does no one tap into the wealth of knowledge we over-60s have?’ 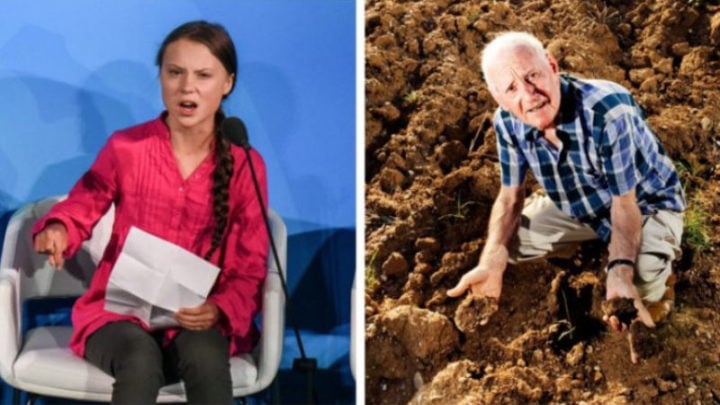 Just like 16-year-old Greta Thunberg, left, there are many over-60s who are "packed full of the wisdom that comes from the shared experience of life" and working positively on climate change. Source: Getty.

There are three tasks that I fundamentally loathe. The first is shaving, but I accept that if I wish to grow old gracefully then I have little choice but to lather up and start scraping. The second is lawn mowing but, thanks to the present drought, that’s off the radar. The third is prepping the wood fire.

I hate chopping wood, splitting the kindling, stacking all the bits and pieces to ensure that when I dip the match, the fire takes and the house doesn’t fill with suffocating smoke signals. But there is an upside, for in carefully constructing the fire I have to cram in bunches of screwed up newspaper and it’s remarkable how much I had once ignored that now seems to be of riveting interest.

Last week I was prepping the fire for what I hoped would be the last time this year when I chanced upon on an op-ed article from 2018 by Edmund Capon, retired director of the Art Gallery of New South Wales. Capon was weighing in with his two cents’ worth on the ugly issue of that time, the establishment of a Ramsay Centre on an Australian university campus.

The Ramsay Centre, as some might remember, was to be a focal point of study about the values of Western civilisation. So I read Capon’s article with some interest but, frankly, it was always an issue I had had difficulty with: Western civilisation, to me, was something I’d grown up with, that I’d taken for granted like the air that I breathe, and while I knew that each of its multi-strand constituent elements were deserving of study in themselves, I felt that the overarching body of core beliefs could look after themselves. In other words, if our art, our medicine, our economics, our sport, our humanity and so on were healthy and dynamic, then so would be Western civilisation as a whole.

But was this a realistic attitude for me to take, I wondered, as I read on, desperate to fix on anything other than the loathsome job at hand. Was it necessary, essential even, for a stocktaking to occur given that the world of our upbringing is unrecognisable today?

Obviously, Greta Thunberg thinks a stock-taking, at least on climate policy, is long overdue. But as I watched her tirade at the United Nations, I found myself torn by conflicting responses. One was an intense admiration for her intelligence and drive and, beyond everything, her courage in giving it, right between the eyes, to a hall filled with political survivors who know a thing or 20 about how to dodge a bullet with a crocodile’s smile.

But, my other response was this: Why would the world realistically believe that a 16-year-old school pupil from Sweden embodies the cumulative knowledge on this or any other subject of pivotal importance to the future of humanity? I asked myself, does she remember what it was like in January 1939 when all the temperature records were smashed in eastern Australia? Does she remember the drought of 1964-67 when not a drop of rain fell over vast swathes of NSW and Queensland? No, of course, she doesn’t, which doesn’t diminish the power of her message. But there are others who do, many of them people like us, over 60 and packed full of the wisdom that comes from the shared experience of life.

We know, not only about how the climate is changing, but about so many other things of vital importance. Because we experienced them and learned from them. But no one wants to hear what we think, because the geniuses in Canberra think they know it already.

I remember a visit to the newsroom of the Australian Financial Review in 1983 by a prominent American journalist on sabbatical from the Los Angeles Times. He was escorted by our associate editor around the clusters of desks where he talked to each of us in turn, asking earnestly what we were working on, how we went about our pursuit of stories, making us all feel pretty much A-Okay. When he had left, I went to the associate editor, who was a pretty good journo in his own right, and asked him what the visitor made of it all. “He said only one thing,” my fearless leader replied, “where is the grey hair.”

In short, our visitor believed, in his bone-marrow, that unless you absorbed the past until it was part of you, you were ill-equipped to understand the present and then to prognosticate on the future. That’s where we’ve gone off the rails, I believe: The vocationalising of Western civilisation since the mid-’80s has had the effect of excising memory and experience and wisdom, not only from our body politic, but also from those who aspire to govern us.

You demand the proof? Ask which was the only Western country that actually grew during the Great Depression and the answer is clearly the United States under Franklin Roosevelt’s New Deal, a ground-breaking program that rejected the barren cost-cutting ideologies that dragged the rest of us even further into the swamp of hardship and hopelessness.

We over-60s, by and large, know that — but when the Global Financial Crisis gave us its big wakeup call in 2007-08, no one sought to tap into our accumulated wisdom to help find a way out. Instead of building on the lucky escape of some fortuitous pump-priming, to put countries like our own back onto a more sustainable footing, we reverted to whingeing type. Leaving us, just 10 years later, at the edge of another abyss, having learned nothing.

I say good luck to young Greta, although I suspect that much of the attention on her may be the titillation of celebrity voyeurism. But why doesn’t the UN or any other body that claims a concern for the welfare of the planet and its people, tap into those who actually know from experience. Surely we have something to offer beyond eating gargantuan meals and casting the plastic smiles that are a shameful characterisation of the elderly as seen daily on our television screens. We not only have active bodies and active appetites, we also have active minds.