‘I marched the peaceful moratorium to end the war in Vietnam’ 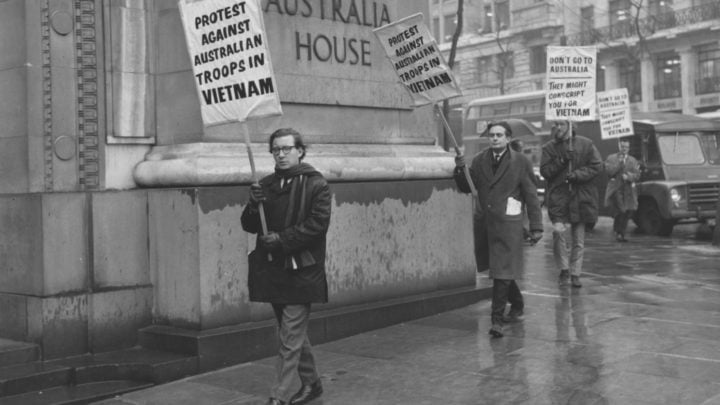 A group of picketers demonstrating in front of Australia House against the introduction of peace time conscription in Australia to send soldiers to fight in Vietnam. Source: Getty Images

Does nostalgia ever really exist? Recently a grandson of a friend of mine, completing Year 12, was striving to compete to enter the army. How times have changed! When we, the Baby Boomers, were at that age, there was social protest by many young people against conscription, and all the armed forces represented. This was compounded by Australia’s involvement in overseas armed conflicts, especially Vietnam.

As a generation, we were the product of our life and times. Our heritage came from our fathers, who survived battling the ‘Japs’ and the ‘Hun’, as they were not affectionately labelled at the time. Many of our parents could not understand the ‘swinging ’60s’, or ‘flower power’ of our age.

In those long gone days, our parents in Australia were sort of afraid of being invaded, a hangover of 1939-1945. Every second suburb housed a little army HQ, for training young men in the Army Reserve. This was homeland defence, where regular army personnel coached young Australians to be prepared to serve alongside combat troops. Just in case.

This was a voluntary occupation, the Army Reserve. Conscription, or National Service, was a norm then. Young men, too young to even vote in those days, (voting age was 21 years old), had their birth dates placed in a lottery. If a young man’s birthday rolled forth, he was off to an army training camp, to serve Australia for two years. I know of some men’s mothers who daily prayed in their local churches that their sons would not be conscripted.

Here is a piece of nostalgia. In comparison to today’s teenagers competing to enter the armed services, the government way back when used to jail young men who were conscientious objectors. They refused to participate in their National Service, because they did not wish to serve in Vietnam.

At that time in history, Australia had been brainwashed by governments about the ‘Yellow Peril’, and ‘Reds under the beds’. Our political leader wanted us to go ‘all the way with LBJ!’ (United States President Lyndon Johnson, leader at the time).

This was a divisive time in our world. Personally, I marched in the peaceful moratoriums. Were we the generation that stopped a war? Or was it all media driving the tide of public opinion, due to the Americans failing in Vietnam? I guess we shall never really know.

History can be a great teacher. Vietnam is only a legend to the millennial generations. A year after the moratoriums, I found myself working as a public service clerk in the then Department of the Army. Here I toiled alongside young men who survived Vietnam. Some were physically maimed, half an arm or an eye missing. The army was looking after them, finding them employment.

On the other hand, I worked there with other soldier survivors, who thanked the army and their National Service training and tour of duty overseas, for providing them with good mates, resilience, and the capability to survive anything in civilian life.

We shall never really know what these soldiers experienced, as we civilians will never really be aware of the privations our fathers survived, to create the Baby Boomer generation. Now young Australians are competing to enter the armed forces. The Army Reserve still exists, to train young people in homeland defence. Just in case, if ever necessary.

Every so often, the concept of conscription emerges from nostalgia, to raise its head. No, we shall never know what the soldiers, army nurses or medics, survived. Let’s all give any Digger, on Earth or upstairs, a wave. Australia is home of the free, because of the brave!

Would you be in favour of conscription today? What were your experiences of those times?