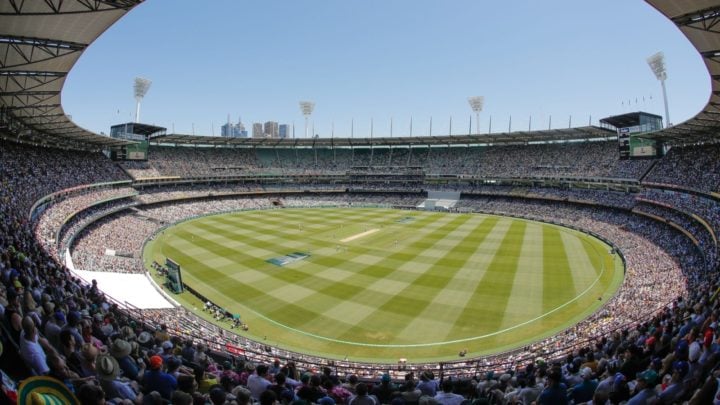 Rod shudders when he hears or reads the phrase 'traditional' in association with the Boxing Day Test in Australia. Source: Getty Images

My edition of the Macquarie Dictionary opens with a bold statement: “Words are not neutral.” It might be a warning, it might be a celebration, but whatever the editors intended, it is as well to remember that in most spheres of life, words are chosen carefully. And should therefore be treated with caution.

Take today, December 26, 2019. Boxing Day. The chances are that among the many cricket tragics out there, there will be keen interest in the test, which begins today at the Melbourne Cricket Ground between Australia and New Zealand. I am quite sure that somewhere in all the media hype for this game, someone will have written, or uttered, the fateful words: the “Traditional Boxing Day Test”.

It’s a funny word, ‘tradition’, because few people in the 21st century would like to be seen as mired in the past, grovelling to old ideas, personages or shibboleths, yet to give a modern game of cricket some marketing cachet, I suppose, the word ‘traditional’ has been tacked onto the event. Actually, my research tells me that this particular great tradition has provenance since only 1980, when it first happened, unintentionally, because of scheduling clutter.

Still, that’s not too bad when you consider the brief existence of rugby league’s Super League in the 1990s when, to give it some (breathtaking) authenticity, a test match was conjured up between Australia and New Zealand to be played on Anzac Day. The trophy for which this contest would be fought over was, I recall, a very strange looking affair, dominated by an Aussie slouch hat and a Kiwi lemon-squeezer hat, like two ginormous ears. It was hardly surprising that within a year, some enterprising flack, who must have known which side his bread was buttered on, was describing this match as … “the traditional Anzac Day Test”. Oh dear!

If I look back on my impressionable adolescence and were to be asked what were the ‘traditional’ Boxing Day sporting events of that time, I would unhesitatingly say the start of the Sydney-to Hobart yacht race and the Davis Cup challenge round, both of which are implanted in my memory. Well, it shows what tricks memory can play because, while the Sydney-Hobart certainly was a feature of post-Christmas relaxation in the ’50s (but only since 1945), the Davis Cup challenge rounds I remember so vividly, began on Boxing Day 1960.

But perhaps the excessive fervour in marketing contemporary Boxing Day sporting events is not so misplaced after all. For haven’t we just finished celebrating a ‘traditional’ family Christmas with cards, tree and decorations, presents, carols and family turkey dinners? Because the late English actor Robert Hardy tells me, through the medium of my cherished VHS tape of Carols for a Victorian Christmas, that the idea of a family Christmas is also of relatively recent origin, the creation of an atmosphere carefully cultivated by 19th century promoters (not Benjamin Disraeli again!) of an accessible image for Queen Victoria and Prince Albert.

It’s at this point that I should admit that when it comes to the misuse of our wonderful English language, I am something of a pedant. It used to enrage me when working for Fairfax newspapers to read the regular insertions of those two clangers — ‘testament’ and ‘prodigal’. It didn’t matter how many times I tried to explain that a ‘testament’ is a contract, normally between the deceased and the living or between God and the faithful; it is not ‘evidence’, the correct word for which would be ‘testimony’, as in ‘expert testimony’ given in court.

And as for ‘prodigal’ — what a shocker! Over the years, I gave up on the countless times when someone who had moved from one place to another, or transferred from one club to another was described by some tyro as ‘prodigal’. I lost count of the number of times I tried to explain that to be prodigal was to waste or squander something valuable, and had no connection at all with the Bible’s Prodigal Son wandering from here to there and back again.

On one famous occasion, after this shocker had appeared on the Herald’s placard, no less, I confronted the paper’s style guru and (sarcastically) expressed my wish to be the lawyer then discussing this gross libel with their offended client, and mulling over the likely damages (and consequently, fees) that would accrue to both as spoils. For, as I pointed out to this brow-beaten gentleman, the Prodigal Son didn’t have to travel across the known world to squander his inheritance; with the aid of the internet and a smartphone he could have blown it twice as fast on his own front verandah.

Well, you may ask, what is the point of all this, beyond irritation at another (yawn) ‘traditional Boxing Day Test’? I could say that it is the silly season and you might permit me to indulge my own peculiar silliness. But it has another purpose. And that is to highlight the flexibility of our ancient mother tongue.

I am reminded of my English Language studies at university, wherein the lecturer, in making this very point, described the evolution of the simple word ‘nice’. According to language scholarship, she said, ‘nice’ first appeared in our language in the 1600s when it meant ‘small’. Since then, she elaborated, it had undergone no fewer than 17 substantive changes in meaning before reaching its present (that is 1963’s) meaning of ‘pleasing’.

So, I got to thinking: what will the continual misuse of words like ‘testament’, ‘prodigal’ and ‘traditional’ result in, somewhere down among the future years. While no one seems to be hedging their bets on ‘prodigal’, I see the Macquarie Dictionary is already giving some ground on ‘testament’, suggesting that it may have some association with ‘testimony’. (If you’re in court and game, that is.)

But what about ‘traditional’? What will our grandchildren’s grandchildren think of us, now, when the meaning of the word might have changed, possibly to ‘worthy of a celebration’ or ‘sensitive to market forces’. Or even ‘laying it on with a shove’. Words, indeed, are never neutral.