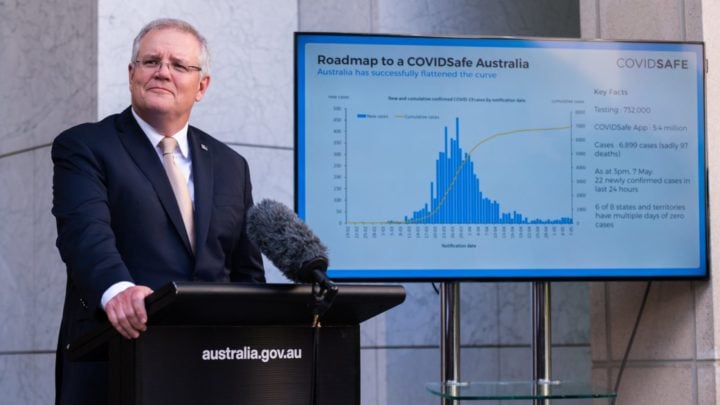 Rod suggests we need to be asking more questions about what our post-coronavirus life will look like instead of accepting things at face value. Source: Getty Images

With the dust beginning to settle on coronavirus, it would not be surprising if people started to reflect on the inevitable questions that follow any great upheaval: ‘How did this happen?’ and ‘What now?’.

Recently, while putting out the weekly garbage, I encountered my neighbour, a university academic and a very erudite person as well. Ensuring that we kept our necessary social distance in the dusk, we exchanged a few words that hinted these questions were uppermost in both our minds.

He had clearly given the post-coronavirus world considerable thought because he suggested I look again at Kenneth Clark’s Civilisation television series, particularly the episode entitled Man: the Measure of all Things. As it happens, my academic friend is quite a few years younger than me, so I had one thing on him because I was around when Civilisation made its first landfall in Australia, and felt its convulsive impact on our suburban minds.

Very few people would remember that the inspiration for the series was none other than David Attenborough, then controller of BBC2, before he became a natural world presenter in his own right. Thus, Civilisation became, in 1969, the world’s first blockbuster television series, bringing to vivid life a hitherto static medium.

Australia did not have colour television then so in 1970, it required the imagination of a few sharp-witted individuals at the University of New South Wales architecture faculty to acquire and screen the series privately, on campus after hours, and open to anyone, student or not. Those who turned up, chilly night after chilly night, shared an experience the likes of which few had ever seen before.

Remember, that we who ‘matured’ in the 1950s and early ’60s inherited a world in which you were expected to believe that everything had always been as it was and would ever be thus, and that anything suggesting otherwise was ‘Red propaganda’. Yet that same (eternal) world was being torn apart daily before our very eyes as the obscenity of the Vietnam War invaded our living rooms via the 7pm news.

How visionary was Civilisation, explaining that what we were then living through was not fixed and unchangeable but was only the latest instalment in the evolution of humanity, expressed through the medium of its art forms. It was astonishing and, in its way, truly revolutionary. Proof of its relevance was the constant repeat viewing of the series over the next 20 years. Until 1990.

In 1990, I was given a temporary assignment to work on the Herald’s television lift-out section and Kenneth Clark’s Civilisation was listed to be screened once more. At that time, the lift-out carried short program reviews for potential viewers and it was my job to massage those reviews to fit the available space. But this one was startling because it made no mention at all of the program content, not even to demolish it in the name of Marxism or postmodernism or any other ‘ism’. Indeed, there was nothing that could be construed as taking issue with Kenneth Clark’s approach to art and its relation to humankind.

Instead, the review was a full-blooded attack on Clark himself, pillorying him as a dead, white male and a snooty patrician at that. As though by being himself, automatically invalidated his presence on our TV screens. And, to the best of my knowledge, Civilisation has never appeared again.

I took my neighbour’s advice and watched the episode Man: the Measure of all Things. Well, to 21st century eyes, Clark certainly looked an anachronism. Tweedy, patrician in the detached way of a gent slipping out for a snifter at White’s, with his cocked eyebrow and laconic, BBC drawl. But the subject matter — that was something else.

This particular episode was about the impact of the Renaissance on an Italy then emerging from 1,000 years of Dark Ages and Gothic Christianity in which all but the most powerful were worthless. In effect, invisible. Thus, the most crucial aspect of 15th century Italy, according to Clark, was the sudden appearance of a new lightness and sense of proportion, particularly in building things on a modest scale that humans, for once, would not be overpowered by. Like those oppressive medieval cathedrals. Because, as he said, “Renaissance Florence discovered the individual”.

Okay, but why Florence? And why then? Clark’s rhetorical answer was, I think, what my neighbour had wanted me to hear: “The spirit of criticism: the air of Florence made minds naturally free and not content with mediocrity.”

That’s when I understood what has been lacking in our own society for so long, the spirit of enquiry (like the restless minds that decided to screen Civilisation 50 years ago) that does not accept that everything is cast in stone. That most things can be improved upon if you try. Ask anyone today what’s the alternative to their falling standard of living and the self-imposed isolation of Covid-19, and you’ll get a helpless shrug. Rather like the ’50s again, but with less cash in your pocket.

I had a good example of this in the early ’90s when I was working on the Herald’s’ editorial page. We had a columnist who promoted free-market economics with religious fervour and on one occasion he wrote about screwing down bottom-line costs in child care. I pointed out that, as a parent myself, the bottom line is always the safety of the child and never the cost. “That’s another issue altogether,” he replied huffily. End of story.

Such a shutting down of debate as that has been replicated time and again, in crisis after crisis, and we’ve paid for it over and over again. You would have thought the global financial crisis of 2008-09 might have encouraged a debate about the usefulness of free-market economics in a worldwide downturn. But no, it was business as usual as we all were bullied into lining up obediently behind the big boys of Wall Street and Beijing.

Now, with our subservience to China and the lazy waste of our economic policies having bitten us with the coronavirus pandemic, then surely we ought to take a leaf out of the Renaissance playbook, and ask: “Is this the right way for a free and independent country, caught by its geography between China and the United States, to function in the best interests of its own people? All of them?”.

In a nutshell, is it not time to be done with mediocrity and mediocrities? Don’t hold your breath.

Do you think we lack the spirit of enquiry?