Come out of the cabinet: Behind the closed doors of Canberra’s sex scandals 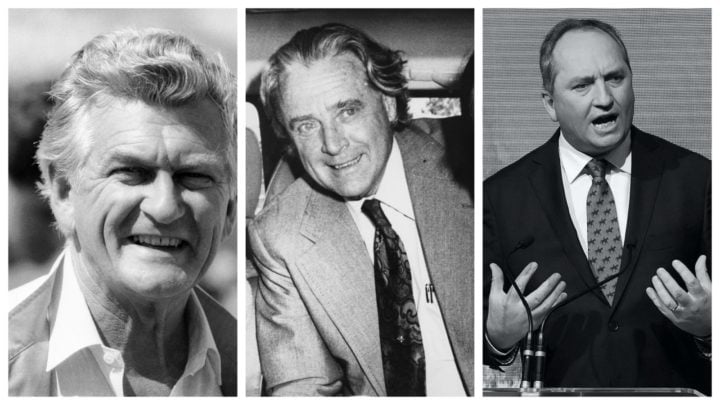 Former Prime Minister of Australia, Bob Hawke passed away at the ripe old age of 89 years. He was loved to the end by his second wife, Blanche d’Alpuget. Years ago, Hawke was married to his first wife while he was PM, with children growing up in the Lodge. He was also squiring his ‘soulmate’, Blanche, around the racetracks of Melbourne and Sydney on super Saturdays.

An open secret. Were they struck by the ‘thunderbolt’ when they met? It does happen. Australia turned a blind eye. Then we consider Barnaby Joyce, more recently, with his publicised affair. Do his first wife and family consider he has a detachable penis?

Rolling back the years, I can recall John Gorton and Ainsley Gotto, his aide. There was Dr Jim Cairns and Junie Morosi. Even more notoriously, the late Billy Snedden died naked on a motel bed. The call girl had left the building. I wonder if that was love till the end, or boys being boys. The ‘little woman’, the wife, waiting at home, also wondering.

Maybe these affairs of the heart (?), or of the detachable penis, received more publicity, than those of men in other walks of life, in our Australian society. We are all human beings, and our love life, or lack of it, is what makes us human.

While wondering, I could ask why male politicians are so appealing to younger women. Maybe the women are struck by the ‘thunderbolt’ of true love. Perhaps they think politicians are men of power in Australia. Politicians may be drawn to politics because they have charisma and wish to lead others. Women may be attracted by a male politician’s charisma.

I do wonder what the first wives’ club consider of all this notoriety about their legally wedded husbands. As a member of this society, we women can assure you that there is nothing colder than an ex-woman’s heart. It does not matter if they are politicians or not, cuddles and mouth-to-mouth revivals quickly disappear for ex-husbands.

Are politicians men of power? They are elected to serve their electorate, the people of Australia. If we had more women in politics, we would wonder if they would have ‘true love’ affairs as well. Gareth Evans and Cheryl Kernot spring to mind. What does any of this imply for running Australia for the benefit of Australians?

Who is next in Australian politics for the ‘thunderbolt’? More salacious gossip in the news. I guess the biggest losers are the children of the first family, who must grow up very resilient. Everyone gains baggage. Then the politician may lose his seat, and their true love survives or not.

Bob Hawke played his part in shaping Australia, loved till the end. All now a part of the passing parade of women and politicians. RIP…

What do you think of love affairs in politics? Why do you think young women are drawn to male politicians, as the author suggests?