‘Alan Jones championed the underdog and the battler, but did he know who they were?’ 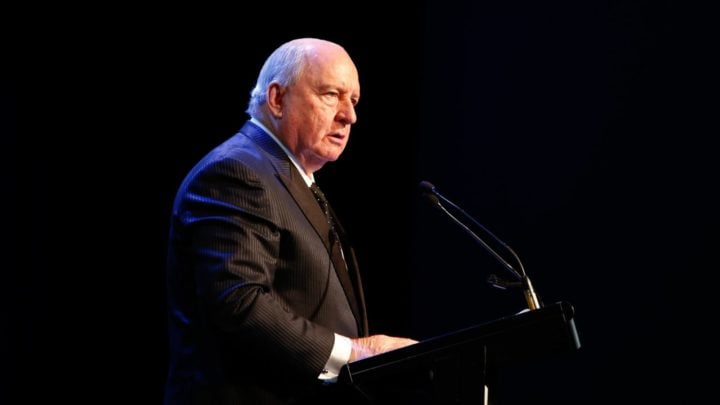 Rod had a chance meeting with radio host Alan Jones (pictured) in the '80s and wishes he'd asked him a few hard-hitting questions. Source: Getty Images

One of the delightful things about writing for the Starts at 60 community is the opportunity to reflect on life as one has lived and observed it, and then sharing your thoughts with those who will understand the journey you have taken. They may not agree with the judgements you make about incidents along the way, but you know you are not talking to people who stare blankly back at you.

I had cause to think on this when I realised that, very shortly, shock-jock Alan Jones would no longer have a regular slot in this country’s radio profile. Although I have never tuned into Mr Jones’s on-air program, even once in the 35 years he has dominated national talk-back, it is impossible not to have an opinion on him, so huge has been the shadow he cast over our public life for more than a generation.

Certainly, I have worked with people who knew him well, either as major rugby players or as minor cranks and narks, so I know some of the scuttlebutt, amplified by the ABC’s Media Watch program (hardly a hot-bed of adulation for him), so if someone were to stop me in the street and demand to know, “Who is the Parrot?”, I could answer truthfully and then demand my $5 prize money. But I don’t want to talk about any of that.

Instead, I’ll say just this. I met Alan Jones once, sometime in the mid-1980s, when he and I were the only passengers in a light aircraft flying from the New South Wales Hunter Valley town of Maitland back to Sydney airport. That hour, or 1.5 hours, was one of the strangest experiences of my life, a moving event you could say, although it brought few tears to my eyes. But I don’t want to labour that point either, on what we might have talked about that drizzly afternoon, because he is not here to contest the accuracy of my memory.

What I do want to say is what we didn’t talk about, which, to me, is much more significant than the usual quasi-political gossip that passes for ‘honest’ exchanges of opinions between people on the fringes of public life.

At that time, if I remember correctly, Mr Jones was still basking in the afterglow of having coached the 1984 Grand Slam Wallabies to the British Isles and, possibly, the 1986 series victory over the All Blacks in New Zealand. He hadn’t yet endured the opprobrium heaped on him when all the hopes invested in the Wallabies for the inaugural World Rugby Cup of 1987 came to a crashing zero.

His radio career had just begun and he was much in demand as a motivational speaker in a society at the crossroads, seeming to have visited some Delphic oracle, which revealed, to him alone, the secret path to success. Thus, at that point in time when we left the tarmac at Maitland, Mr Jones was not only at the top of his game, he was relaxed and expansive having just completed another polished performance before a dazzled audience.

So, why didn’t I cut to the chase and sock it to him? “Alan”, I should have asked. “What do you mean by ‘Struggle Street’ and who, exactly, are these ‘battlers’ that you take up the cudgels for?”

Now, Mr Jones had a significant history in the Liberal Party for a good 10 years before our encounter high above the Great Dividing Range, and well before he burst into prominence as a football coach, so his social opinions would have been well-formed by then. Let me say, at this point, I am not gunning for the Liberal Party (one of my first cousins was a knighted deputy premier of Queensland under Joh) and a good part of me believes that the overthrow of John Gorton’s prime ministership (1968-70) ended one of the great wasted opportunities of modern Australian history.

Nor am I judging Mr Jones unfairly on ahistorical grounds, because the full horror of Thatcherism in asset-stripping Australia had not then unfolded, as we sat together in that tiny four-seater way back then. But … The neo-liberal drums were already beating feverishly and so I believe I am entitled to ask 30-odd years later, who are they, these people who you claim so intimate an attachment to, but which none of my former colleagues in the Fourth Estate bothered to ask you to define.

When I look at the rubble of our once great country I want to know, not only who are they, but if you are as influential as every quavering politician sitting opposite you appears to confirm, why has nothing been done to take the struggle out of Struggle Street or give the poor old battlers a decent victory for a change?

As I said, I have never tuned into Mr Jones and I won’t trust the opinions of his enemies, so I’m not going to put words in his mouth. But when I look around at the outrages being perpetrated in the name of free markets, call me ‘wet’ if you like, I can’t get past the homeless, dirty and ill-clothed, sleeping in lift-wells and under bridges.

Nor do I cease to be puzzled by the pitiless crucifixion of what remains of the once-great trade union movement — to the cheering of free-market partisans, thumbing their noses at 2,500 civilising years since the Parthenon was erected on the Acropolis of Athens as an enduring symbol that people do matter. Not just the ‘winners’. Not just the ‘lifters’, but all the people. No matter what a hash they might have made of their own lives.

Meanwhile, Mr Jones will still be out there, with regular spots on the box, so he has every opportunity to express whatever outrages him — if he is the tribune of the voiceless as his advocates would have us believe.

So, Alan, I would like to say, it’s never too late to clear up, who’s in and who’s out, who deserves a champion and who doesn’t; so, what about a few kind words for those trying to live on a Job Seeker’s $40 a day? What about a hand (a real hand that is, not a confected hand-clap for the TV cameras) for those who are on the emergency services front line, day-in, day-out, keeping people safe and alive, yet paid little more than the smell of an oil rag?

These are some of the questions I regret not asking when I had the opportunity years ago, because in my view, they are the real battlers still living on Struggle Street.

Did you ever listen to Alan Jones's radio program? Who do you think he was representing when he spoke of underdogs and battlers?