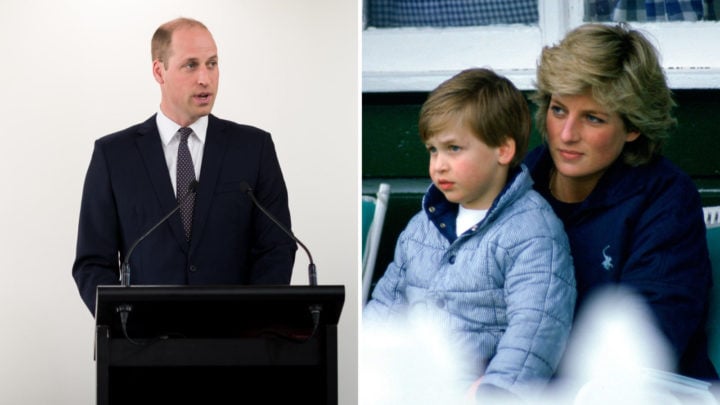 “I have had reasons myself to reflect on grief and sudden pain and loss in my own life,” Prince William told families of victims during a speech in Christchurch. Source: Getty

Prince William is currently in New Zealand where he’s spoken to the friends and families of last month’s deadly Christchurch shootings, sharing some of his own personal experiences overcoming grief.

Meeting families of victims at the Al Noor Mosque, the Duke of Cambridge talked about the death of his mother Princess Diana and how he understands the pain the victims and their families are going through.

“I have had reasons myself to reflect on grief and sudden pain and loss in my own life,” he said at one point during his speech. “In my role, I’ve often seen up close the sorrow of others in tragedy, as I’ve seen today.”

“What I realised is of course grief can change your outlook,” he continued. “You don’t ever forget the shock, the sadness and the pain. But I do not believe that grief changes who you are.

“Grief, if you let it, will reveal who you are. It can reveal depths that you did not know you had. I stand with you in firm belief that the forces of love will always prevail over the forces of hate.”

Prince William recalled waking up in complete shock in London last month when he heard of the Christchurch attacks.

“An act of unspeakable hate that unfolded in New Zealand – a country of peace – and it had unfolded in Christchurch, a city that has endured so much more than its fair share of hardship,” he said. “When it was confirmed that 50 New Zealand Muslims had been killed, murdered while peacefully worshipping, again, I just could not believe the news.”

Elsewhere in the speech, the father-of-three praised New Zealand PM Jacinda Ardern for her strength following the shootings.

“Your Prime Minister has shown extraordinary leadership of compassion and resolve, providing an example to us all,” he said, while also crediting police who “saved lives in the most challenging of circumstances”.

“Your Prime Minister has shown extraordinary leadership of compassion and resolve, providing an example to us all.” — The Duke of Cambridge on PM @JacindaArdern 🇳🇿 pic.twitter.com/Mh8FW2dI3K

He also praised the families of victims and said people from all faiths and backgrounds could learn from how they rallied together following the deadly events on March 15.

“Extremism in all its forms must be defeated,” he said. “The message from Christchurch and the message from Al Noor and Linwood mosques could not be more clear: the global ideology of hate will fail to divide us.”

His speech comes a day after he visited five-year-old Alen Alsati and her father Wasseim. Alen is currently recovering in Starship Children’s Hospital in Auckland after she was injured in the attacks.

She awoke from a coma after suffering “critical injuries”.

“Do you have a daughter?” Alen asked the prince from her hospital bed in a heartwarming clip shared by Kensington Palace.

Friday is Prince William’s final day in New Zealand after spending time in both Christchurch and Auckland this week.

What did you think of Prince William’s speech? Do you have a message for the families affected by the New Zealand shooting?