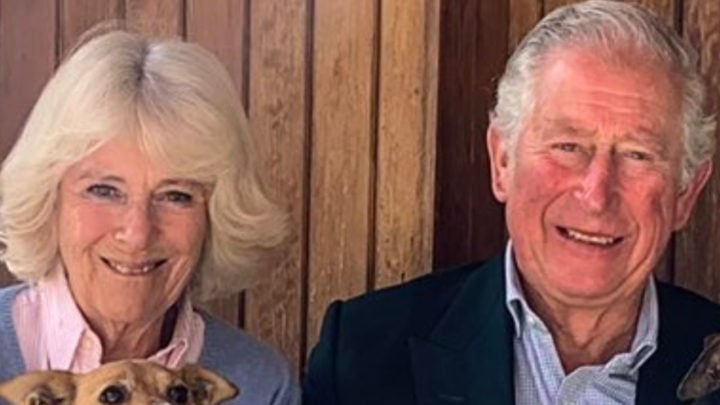 The new photo shows Charles and Camilla on the porch at Birkhall. Source: Clarence House.

Prince Charles and Camilla may be in isolation like the rest of us, but they took some time this week to mark a special occasion as they celebrated their 15th wedding anniversary.

The happy couple released a new photograph to the public in honour of the milestone, which showed them posing happily on the porch of their home Birkhall, on the Queen’s Balmoral Estate in Scotland, where they have been staying amid the ongoing coronavirus emergency.

While we’re used to seeing Charles dressed in dapper suits and double-breasted jackets, the Queen’s eldest son was dressed more casually for the relaxed shot, wearing a pair of green corduroy trousers, with a pale blue shirt and navy blazer. Meanwhile Camilla looked laid-back in blue jeans and a knitted cardigan.

The photo, which was released by Clarence House on Wednesday, one day ahead of their anniversary, also features the couple’s adorable pet dogs, named Bluebell and Beth.

“Ahead of The Prince of Wales and The Duchess of Cornwall’s 15th wedding anniversary tomorrow, we are sharing this photo of Their Royal Highnesses with The Duchess’s dogs Bluebell and Beth,” a post shared alongside the image read.

Fans were delighted to see the image and sent their best wishes to the couple on their wedding anniversary. One person wrote: “Happy Anniversary! And many more happy years to you!”

Another commented: “So good to see Their Royal Highnesses outside, smiling and happy. Blessings on you both!” While another said: “Happy anniversary to your highnesses. A true fairy tale in my eyes.”

The heir to the throne and Duchess of Cornwall tied the knot on April 9, 2005, in a civil ceremony at Windsor Guildhall. Both had been married previously, with Charles being married to the late Princess of Wales for 15 years, while Camilla was married to Andrew Parker Bowles for 22 years.

As with other members of the royal family, they regularly mark special occasions such as birthdays and anniversaries by sharing new and never-before-seen photos with the public. Last year they released a dramatic black and white photograph of themselves from a photoshoot, which they posted on their official Clarence House Instagram page.

‪Thank you for your warm wishes on the occasion of The Prince of Wales and The Duchess of Cornwall’s wedding anniversary.‬ 📸 @alexilubomirski

Posting the image, which shows Charles and Camilla staring lovingly into each other’s eyes, online, Clarence House thanked people for their “warm wishes on the occasion of The Prince of Wales and The Duchess of Cornwall’s wedding anniversary”.

The stunning image was taken by professional photographer Alexi Lubomirski – who also took the Duke and Duchess of Sussex’s official engagement and wedding photos – for Vanity Fair. Lubomirski also wished the couple a happy anniversary, writing: “HAPPY ANNIVERSARY to HSH Prince of Wales and The Duchess of Cornwall!”

Do you have a message for Charles and Camilla on their special day?