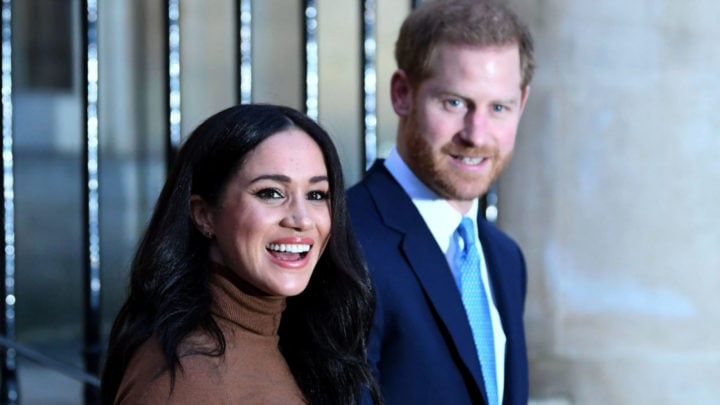 Thomas Markle gave his views on the recent decision by the Duke and Duchess of Sussex to take a step back. Source: Getty.

As the world comes to terms with the fact that Prince Harry and wife Meghan will no longer be carrying out official duties or representing the Crown, after Buckingham Palace revealed the details of their exit from the royal family, the duchess’ estranged father Thomas Markle has weighed in on the drama surrounding the couple.

Speaking as part of a documentary for UK television network Channel 5, Markle said he believes his daughter – whom he has been estranged from since before the royal wedding in May 2018 – is “cheapening” the monarchy, branding her behaviour “embarrassing”.

His comments – which appear to have been made before the deal was finalised – emerged as the news broke that Her Majesty the Queen had agreed upon the details of the couple’s royal exit – which has been dubbed ‘Megxit’ by social media commentators.

“When they got married they took on an obligation, and the obligation is to be part of the Royals and to represent the Royals. And it would be foolish for them not to,” he said, according to UK newspaper the Daily Mirror.

“This is one of the greatest long-living institutions ever. They are destroying it, they are cheapening it, making it shabby. They are turning it into a Walmart with a crown on it, they shouldn’t be doing this.”

Thomas Markle made the comments as part of an upcoming documentary titled Thomas Markle: My Story, which looks at the public fall-out between the father and daughter in the lead-up to Harry and Meghan’s wedding at Windsor Castle almost two years ago. The documentary is expected to air this year, however a date has not yet been set.

On Saturday evening (UK time) the palace released a statement regarding the future of the Duke and Duchess of Sussex, less than a fortnight after Harry and Meghan initially announced their intention to “step back” from the front-line of the firm.

As part of the deal, the couple will drop their HRH titles as they are no longer working members of the royal family. They will also no longer receive public funds for royal duties, with the terms of the deal coming into effect in Spring 2020 (UK time).

And, following a backlash from the British public, the couple have also agreed to pay back the £2.4 million (AU$4.6 million) of public funds that was spent on refurbishing their UK home Frogmore Cottage, which they will keep as part of the deal.

Her Majesty the Queen also released a very personal statement regarding the news, in which she thanked the couple for their work in recent years and described her pride at how quickly Meghan has “become one of the family”.

“Following many months of conversations and more recent discussions, I am pleased that together we have found a constructive and supportive way forward for my grandson and his family,” the Queen said. “Harry, Meghan and Archie will always be much loved members of my family.”

She added: “I recognise the challenges they have experienced as a result of intense scrutiny over the last two years and support their wish for a more independent life.

“I want to thank them for all their dedicated work across this country, the Commonwealth and beyond, and am particularly proud of how Meghan has so quickly become one of the family.

“It is my whole family’s hope that today’s agreement allows them to start building a happy and peaceful new life.”

Do you think Harry and Meghan made the right decision? Do you agree with Thomas Markle?