A day in the life of a euthanasia doctor: ‘I think it’s a really special role to have’ 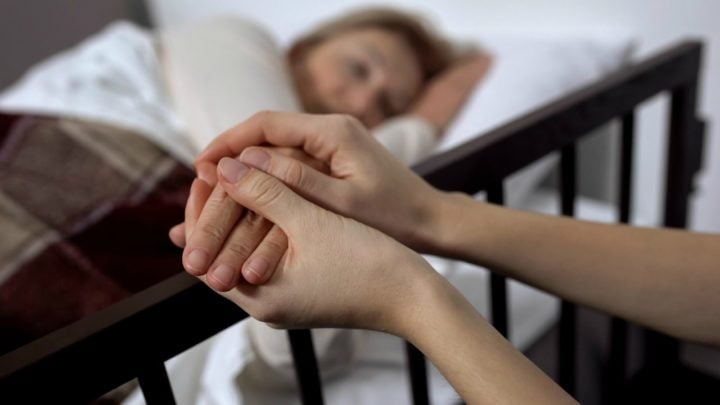 Victoria and Western Australia are currently the only Aussie states to have a voluntary assisted dying law in place. Source: Getty.

He’s helped several Australians voluntarily end their lives, and now in an exclusive chat with Starts at 60, Cameron McLaren, one of the country’s top euthanasia doctors, has revealed what it’s really like to help terminally ill patients die.

McLaren has been involved in more than 40 cases since Victoria’s voluntary assisted dying law came into effect last June, which gives anyone suffering from a terminal illness with less than six months to live, the right to end their life legally.

The leading oncologist said he felt he owed it to his patients to get involved, adding he couldn’t bear not being able to help his patients if they asked to end their life.

“I didn’t want people that I had been looking after to then ask me about this,” he says. “For me to have treated them for three years and then say ‘well okay, you can go and see someone else about that’. I didn’t feel like that was offering the patient respect in terms of supporting their care from diagnosis to death.”

He continued: “I think it’s a really special role to have. I’ve gotten a lot of satisfaction out of it, which might sound a little bit morbid, but I think certainly in the cases that I’ve been involved in, people are often dying in a way that they don’t want to.”

So, what does the process look like? In Victoria, McLaren says it starts with a patient’s request for help. There are strict stipulations though and anyone who wishes to apply must be a Victorian resident over the age of 18 and have been assessed by two doctors. After checking a patient’s eligibility, McLaren says he then applies for a permit to prescribe them the medication. The medication is then delivered to the patient’s home by a pharmacist, who performs their own assessment. Once the lethal dosage is in the hands of the patient it’s theirs to keep.

“I recently had a patient who wanted to take it immediately,” he says. “But then, I’ve also had patients who have been delivered their medication and it’s still sitting on their shelf because they’re enjoying life.”

McLaren says family members are often upset about their loved one’s decision to end their life, but when the day comes around, they’re supportive and respectful, and the moment itself is usually very calm. He also adds the majority of the cases he’s been involved in happened in the comfort of the patient’s home.

“The patient never flinches,” he says. “They’re not nervous, they’re not scared, they just drink the medicine and go to sleep and I’m just in awe of their bravery every time.

“This isn’t a decision that they make lightly. I essentially come into it at the end after they’ve decided, but they’ve probably been thinking about it a long time before that.”

McLaren says he’s always been in favour of euthanasia. “I think this just harps back to the quality versus quantity of life,” he says. “No one wants to live forever in pain. [As doctors] we’re there to support our patients and if that patient wishes they weren’t alive anymore … then I think that’s something that we should support.”

What are your thoughts on euthanasia? Do you think it should be legalised across Australia?