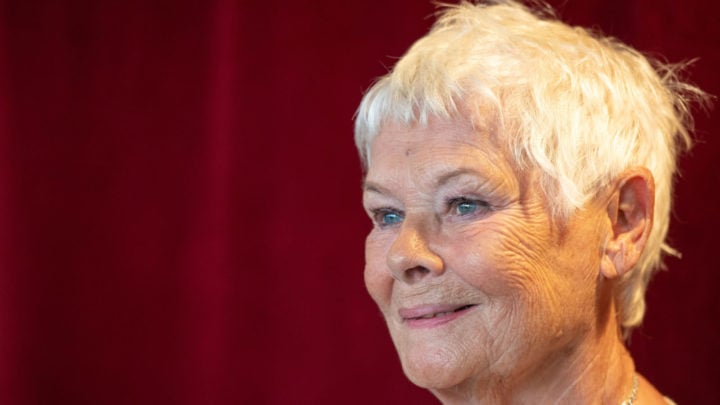 Dame Judi Dench has opened up about why she never intends to retire. Source: Getty

She has certainly made a name for herself in the movie industry starring in a multitude of hit films over the years and Dame Judi Dench has claimed she won’t be slowing down any time soon, revealing she has no intention of ever retiring.

At 84 you’d think the talented actress would be looking forward to some down time with many people 20 years her junior already farewelling their busy working lives, but taking a step back is apparently the last thing on Dench’s mind. Speaking about her future plans recently, the Cats star admitted during an opening of the Ashcroft Playhouse in Croydon, South London that she’s already doing everything she would like to in retirement, so there is no point in saying goodbye to her working days, The Mirror reports.

“I am so bored of the question,” Dench said, when asked about retirement. “You retire in order to walk, paint or travel. All those things. Well, I get to do that. I am doing the job that I would retire to do.”

While the actress has the freedom to make her own decision on retirement, not everyone has that luxury with a recent study revealing one third of over-50 Aussies don’t think they’ll ever be able to give up work, simply because they cannot afford to. Commissioned by the Council on the Ageing (COTA), the State of the (Older) Nation 2018 Report provided an in-depth look at the attitudes of older Australians across all key areas of life including employment, finance and health.

Compiled from a survey of more than 2,500 older Australians, the annual report revealed that 29 per cent of older Australians who are still in paid employment do not think they will ever retire, as well as the fact that the majority are struggling to keep up with the rising cost of living. According to the figures 38 per cent of older Aussies – defined as those over the age of 50 – are still in paid employment.

However, when considering those over 65, the number reduces to just 15 per cent, with 3 per cent holding down full-time jobs, 8 per cent working part time and 5 per cent self employed. Not surprisingly the study also found that of those who said they did not expect to retire, this attitude became far more likely among those who have little to no superannuation, with 42 per cent of those without super sharing this view compared to 26 per cent of those who do have super.

There are however, others that have retired and still like to keep their minds and bodies going with Starts at 60‘s busiest blogger Brian Lee recently revealing why he spend his free time penning hundreds of blogs for the website, rather than sitting with his feet up. At 84, Brian’s working life is some years behind him.

He said it could have so easily have been spent sitting in front of the television watching “all those wonderful ‘reality’ shows” that he and his wife, Jacqui, loathe so much. “But I had the good fortune of stumbling across Starts at 60 and I’ve never looked back.”

“I was delighted that someone thought my words were worth printing,” Brian said. “The very fact that they were encouraged me to try again and before long I was turning out copy at a rate of knots. It was as though one idea fed the next one, the stories I wrote about the war, for example, led me to consider what life was like in the years after the war, and then I started reminiscing about all the great developments made in science, engineering and all sorts of other areas.”

Part of the enjoyment Brian gets from writing for Starts at 60 is the opportunity to engage with other community members, those who read his blogs and share their opinions or feelings. “I couldn’t believe there were people who liked what I was writing and took the time to leave a comment on my blog,” he explained.

“The vast majority of the comments are complimentary or congratulatory, but even when someone takes a more critical approach I can appreciate their different point of view. It’s through debate and discussion that we learn and expand our own knowledge.”

Are you retired? Or do you like working and want to keep busy?