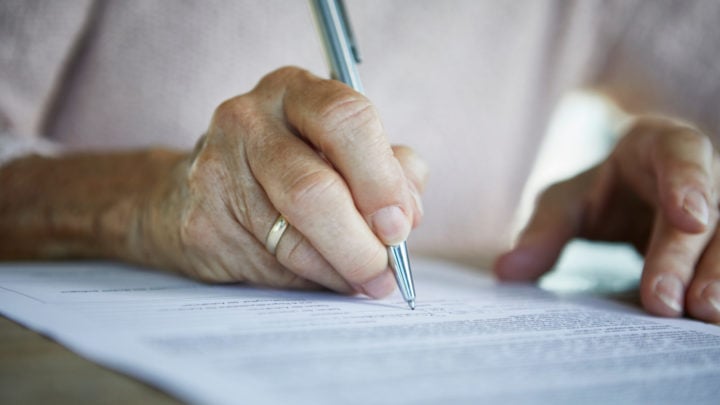 A mum has sparked a debate on inheritance after explaining how much time she spends looking after her own mother compared to her siblings. Source: Getty

Helping out a mother or father in old age may seem like an obvious choice with many bending over backwards to ensure their parents live out a happy life. But what may seem like an act of generosity or love for some, can be viewed as a way to secure money in the future with many questioning whether inheritance is something you earn or something you should simply be entitled to as a child or grandchild.

There is no denying that looking after an ageing parent can prove difficult, especially when dementia or physical illnesses take hold, but after years of mums and dads looking after their offspring some may argue it is just the way life goes and something kids should be willing to do. However, for others this means they have the right to an increased inheritance and should gain more from their parents once they have passed.

For one mum, the topic has been weighing on her mind heavily with both herself and family members in a difficult position when it comes to caring for a loved one. Taking to online forum Mumsnet recently, she explained how much financial and personal help she has given her mother over the years compared to her siblings. She said while she has spent hours upon hours looking after her mum, the others haven’t committed much time at all, but will apparently expect to receive the same amount of money as her upon their mother’s death.

“My mum made my life a misery in many ways,” she wrote on the forum. “But I wouldn’t see her out of the street. I paid her mortgage and her bills when she couldn’t to keep her house. Her other two children left without a word or help, but I know they’ll come crawling back when there’s money in the picture.”

But that isn’t the only difficulty the mum said she’s facing with her father apparently expecting a share of his own mother’s inheritance when she dies, despite not helping out with her care in her later years. “When his mum dies he will want his ‘share’,” she explained on the post. “His sister has had his mum live with her for 5 plus years, dealt with all the s**t that comes with dementia, [he] refuses to put her in a home to protect his inheritance, yet not help his mum anyway.”

She continued by explaining: “The eye opener was when he was present during a conversation between me and his sister. His sister said she was tired because his mum has woken up screaming asking for X (long dead) and he paused and said … well let’s talk about my holiday in Italy. Yet he still expects an equal share. My aunt is dealing with everything. I don’t think it’s fair.”

The mother’s post was met with many responses which delivered a mixed view on inheritance and who deserves what. While many agreed with the mum claiming those who put in more effort to help their parents have a right to expect more in return, others said children shouldn’t expect to receive any amount just because they helped out.

“I agree with you,” one person commented. “It is so wrong that children (adults) absent themselves from looking after or even just helping a sibling with elderly parents and still expects inheritance when the old person dies. It is sheer greed.”

Their words were echoed by another who added: “I understand what you mean. My aunty and uncle did so much for my grandma, visited every day, cooked, cleaned, organised everything. My other uncle couldn’t be bothered to even go to his own mother’s funeral. So yes, I think my aunt and uncle should have had more inheritance than him. But obviously it doesn’t work like that unfortunately.”

There were many with the opposite view though, claiming despite the added effort put in to care for parents, it shouldn’t mean they have the rights to more inheritance. One person even said the idea that you earn or are owed something for helping out “abhorrent” and that debating inheritance will only add complications during an already emotional time.

“No, I don’t think people are owed something for being a carer,” they wrote. “That’s a free choice usually made without a clear guarantee of inheritance.”  While another chimed in writing: “I help them because I love them and because it’s the right thing to do, not because I expect to get something in return. They have already done their bit for me when I was growing up.”

They added: “You haven’t earned the right to a greater share of the inheritance just because you choose to take care of your mother. If you want your money back, you need to make it clear that it’s a loan and draw up some kind of contract.”

Do you believe inheritance is earned? Or do you think everyone deserves a right to inheritance no matter how much they help out with their parents throughout their lives?