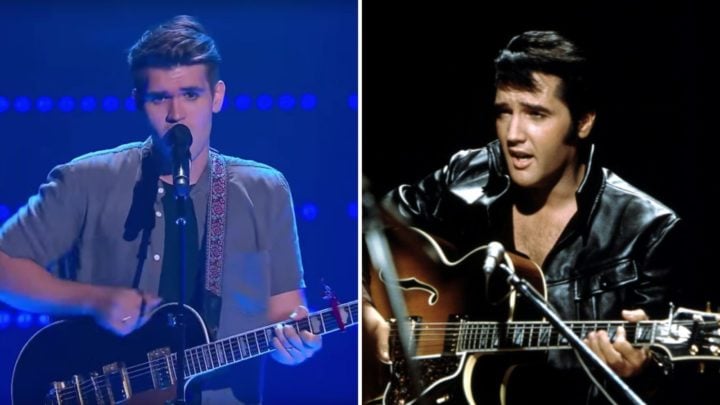 After wowing the judges with a haunting rendition of Love Me Tender on The Voice, Dakota Striplin sensationally claimed that he could be the secret grandson of Elvis Presley. Source: YouTube.com/The Voice Australia and Getty

Season eight of The Voice Australia is underway and while coaches Delta Goodrem, Boy George, Kelly Rowland and Guy Sebastian have seen many talented singers, a contestant on Tuesday’s episode claimed music royalty was in his blood.

Dakota Striplin from Queensland appeared on the hit reality show and claimed he may be the secret long-lost grandson of Elvis Presley. Before taking to the stage to audition in front of the star judges and a live audience, the budding musician explained why he believed the late “King of Rock and Roll” was his grandpa.

“My dad doesn’t like me talking about his too much because it’s kind of hard for him,” he admitted. “My grandma, she worked for Elvis at a lot of his events and stuff in Hawaii when she lived there. She used to take my dad on trips to Hawaii by himself without the other kids.”

Striplin claimed that when Presley passed away in 1977, his grandma “lost it”.

“She was drinking for weeks, wouldn’t leave her room and it was kind of a big reaction to hearing about a celebrity dying.”

The 24-year-old added that after taking DNA tests a few years ago, his dad discovered his father wasn’t his biological dad.

“The theory is that Elvis is my granddad,” he said. “That would be pretty cool.”

Striplin then took to the stage with a haunting rendition of Presley’s 1956 hit, ‘Love Me Tender’.

Rowland was the first coach to hit her buzzer and turn her red chair, clutching her heart as the singer belted out the classic hit. Goodrem then turned her chair and said: “I need to see this. What’s going on here?”

Sebastian didn’t turn his chair but said Striplin was “seriously talented”. Boy George was curious to know why the singer chose ‘Love Me Tender’.

“I’ve always loved Elvis so much,” he said. “He’s been a big idol for me since I was little, but recently my dad actually found out that his father wasn’t his biological father and there’s a lot of history with my grandma.”

He explained how his gran worked at Presley’s concerts and told the judges his story.

“So you could be related to Elvis. I love that,” a shocked Boy George said.

“That’s the theory. That’s the running theory is he could be my grandfather,” Striplin added.

Rowland added she could see a resemblance between the singer and Presley, with the singer eventually choosing her as his coach for the series.

Fans were hopeful Striplin really was the ‘Hound Dog’ singers grandson and flooded Facebook with messages.

One person wrote: “He’s extremely talented. I hope he does actually manage to find out the truth one day. I couldn’t imagine being left wondering all my life and never finding out.”

A third message added: “If there was any inkling that I was Elvis’ grandson, I certainly wouldn’t stop until I found a positive answer to the whole question. However and possibly coincidentally, this young man does have a likeness to Elvis and he can sing. Keen to see more of his story.”

Others questioned why the singer would make such a statement on national television with no proof and even claimed it was easy for anyone to mimic Presley.

“Anyone can study Elvis and learn his moves talk like him learn his deep southern accent,” another viewer pointed out.

What did you think of Dakota Striplin’s audition?