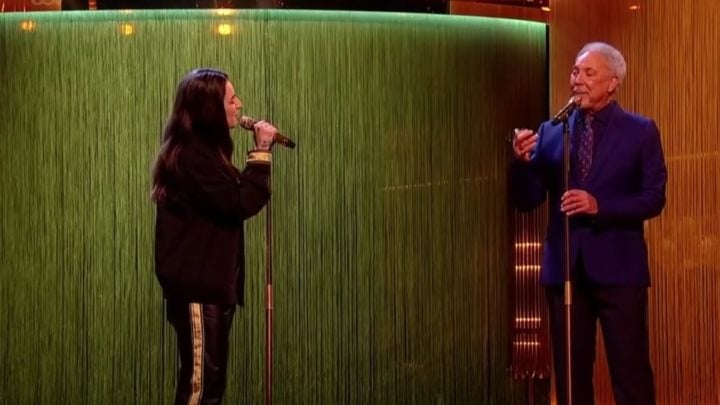 Tom Jones took to the stage with a contestant on The Voice for an incredible rendition of an Elvis classic. Source: YouTube.com/TheVoiceUK

The Voice UK came to a dramatic conclusion on Saturday evening and while 17-year-old singer Molly Hocking won the popular reality series, it was two incredible performances by Tom Jones that truly stole the show.

The Welsh crooner – who is no stranger to belting out a tune on the hit program – took to the stage with two of the finalists for two unforgettable performances.

In the first performance, the ‘What’s New Pussycat’ singer was joined on stage with contestant Deana Walmsley – who ended up placing second in the whole competition. The pair belted out a haunting rendition of ‘I Believe’.

The track was made famous by Elvis Presley in 1957, but has been recorded by a number of different bands and singers over the years. Tom began the song, with fellow coaches Jennifer Hudson, Olly Murs and Will.i.am watching on in complete awe from the audience.

Viewers at home were also impressed by the duet.

One person on Twitter wrote: “Deana and Tom Jones believe was simply beautiful. Deana should have won by a mile. Best by far.”

A second message read: “#Deana and #TomJones sound good together singing ‘I Believe’. Made me a bit emotional.”

Another fan described the performance as “so beautiful”.

It wasn’t the only time Tom took to the stage during the finale. In another incredible performance, the 78-year-old sang ‘Don’t let me be Misunderstood’ with 28-year-old contestant Bethzienna Williams.

The song has been released by a number of artists over the years including Joe Cocker in 1969, Nina Simone in 1954 and Animals in 1965. Tom and Bethzienna did a fantastic job of putting a modern spin on the classic tune.

Bethzienna sang the first part of the song but it was Tom who really got the crowd going when he belted out his part of the track. The most magical moment was when the two singers joined forces and sang together.

Tom had wowed fans with a number of spontaneous songs during season eight of The Voice. An impromptu performance with fellow judge Jennifer last month was one of his best to date, with the pair blowing viewers away with a perfect duet of ‘This Is A Man’s World’.

During that performance, Tom showed off his flawless vocals, while Jennifer showcased her incredible vocal range as she hit a series of top notes at the end of the song, bringing the crowd to their feet.

What did you think of Tom Jones’ latest performances? Have you ever seen him perform live?