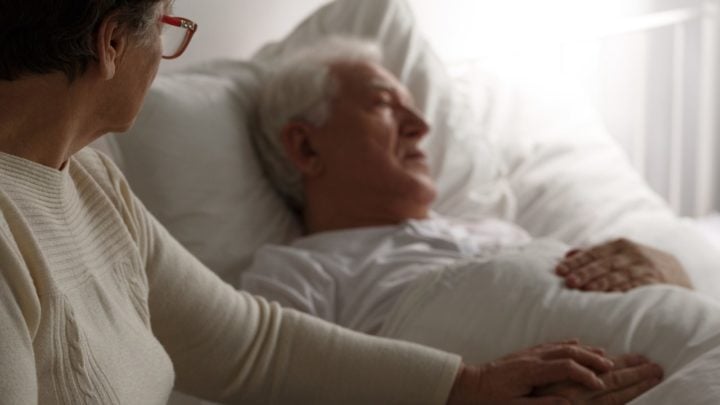 Don’t leave a loved one wondering if they ‘did the right thing’ – set out your wishes for the end of life in a formal advance care plan.

Did you know that almost one in two of us will be unable to make our own medical decisions at the end of our lives?

It’s a scary statistic that most of us don’t like to think about, which is probably why eight out of 10 Australians say it’s important to talk to family about end-of-life wishes but just three in 10 over-65s have formalised their wishes in an Advance Care Directive.

Starts at 60 takes advance care planning and writing Advance Care Directives seriously. We see the impact a lack of it has on members of our community. Some have experienced the pain of making decisions for a loved one without knowing their wishes – wondering if they’re making the right choices in a highly stressful situation and later regretting things not said or done in the heat of the moment.

That’s why we’re working with Advance Care Planning Australia to spread the word about advance care planning, to help you make a plan that can increase the odds of a better end of life for you and peace of mind for your nearest and dearest.

Despite the scary statistics, too few of us actually end up making an Advance Care Directive that can guide the medical treatment received at the end of life or when a person is incapacitated.

We have stories from real people who’ve experienced the impact advance care planning – or a lack of it – can have. Their experiences have the power to get us thinking in a way numbers never will.

Jean is a former nurse who was enjoying retirement with her husband Peter in regional South Australia. The couple, in their mid-60s, loved to cruise, and it was when they were exploring the South Pacific that Peter seemed more worn out than usual.

“He was a typical Aussie bloke,” Jean says. “He didn’t like going to the doctor and wouldn’t say much if he felt sick, so he just brushed it off.”

But Peter’s health didn’t improve on their return to Australia and after watching him struggle to make it from room to room in their house, Jean insisted he go to their GP. He was sent immediately to hospital, where he was diagnosed with cancer.

After chemotherapy, Peter was able to enjoy a three years of remission. But the disease returned – and this time his prognosis was terminal, so the couple decided to take a final holiday in Queensland. While there, Peter developed an infection that caused him to be hospitalised.

As the infection worsened, leaving Peter unconscious, Jean was left with a terrible decision.

“We knew he was very unlikely to recover from the infection,” Jean recalls. “He’d talked about not wanting to die in hospital so I looked into getting a medical flight home, but that would’ve involved more invasive treatment that might have prolonged his suffering. So I made the decision to keep him comfortable in the hospital in Queensland.”

“It was so hard to make that big decision about his care without knowing exactly what he’d have wanted me to do,” Jean says. “When he was first diagnosed with cancer, and again when it came back, his doctor advised him to do an Advance Care Directive but he never did.

“If we’d had that, I would’ve felt more sure about the choice – it would’ve lessened the grief in a way, knowing I’d done the right thing.

“I’d say, if you love someone, make it easier for them. Make an advance care plan and fill out an Advance Care Directive so they’re not left making difficult decisions for you.”

Alex is a palliative care physician with a major hospital. She’s seen the difference advance care planning, complete with an Advance Care Directive, can make to a person’s experience of death, and to that of their family.

She recalls Raymond, a man in his mid-70s with advanced dementia, who had been transferred from a nursing home to a hospital with pneumonia, where he was suffering delirium caused by his fever.

“This resulted in him being shackled to the bed so that they could administer IV antibiotics,” Alex remembers. “His daughter was at the bedside bereft and trying to comfort her agitated and sick father.”

Raymond’s daughter told Alex that her father had created an Advance Care Directive years earlier with the help of his GP, in which he was clear that he didn’t want invasive treatment at the end of life. But amid the rush to treat his pneumonia, the nursing home and hospital had overlooked the document.

“Armed with this new information, I was able to cease IV antibiotics and administered medications to stop the delirium so that he could be unshackled,” Alex says. “He died a few days later in hospital, with his daughter by his side, and supported by hospital staff who made sure Raymond was comfortable and pain-free.

“Raymond received the peaceful, dignified death that he had asked for and deserved.”

Alex says she sees many “awful deaths” too, in which partners or adult children are forced to make decisions about their loved one’s care in the direst of circumstances, and she’s keen to ensure that doesn’t happen to her own family.

“I’ve started a frank conversation with my husband about the kind of care I would want if I couldn’t speak for myself,” she says. “And I’ve urged my parents to take action and not have me and my brother left guessing about their wishes in the back of an ambulance.”

How well do you know your loved one?

Research shows that those closest to us often don’t know our end-of-life wishes unless we expressly have these conversations or write down our preferences.

A new, thought-provoking video puts Australian couples to the test. It reveals that those closest to us are often unsure of our end-of-life wishes.

“People need to know that a loving relationship is no substitute for advance care planning,” Advance Care Planning Australia Program Director Linda Nolte says. “It’s a terrible burden for families to bear, having to blindly make life and death decisions without knowing their loved one’s preferences.”

Advance care planning is setting out your values and preferences regarding the health care you would want if you could no longer make your own medical decisions. Those preferences may focus on quality-of-life aspects, such as being able to eat out or communicate. It may also include specific instructions such as scenarios in which you would prefer to avoid resuscitation or situations where you would consent to tube feeding.

Advance care planning may involve appointing a substitute decision-maker who will speak for you when you’re not able to, and completing an Advance Care Directive.

An Advance Care Directive is a legal document that tells healthcare professionals what type of treatment is acceptable to you, and only comes into effect when you’re unable to speak for yourself. Of course, you should discuss your preferences at length with your chosen substitute decision-maker but an Advance Care Directive can also help that person know that they’re making the choices you’d want.

Be aware that the laws and regulations for advance care planning differ across Australia. You will find relevant information and forms for your state or territory on the Advance Care Planning Australia website, or you can call the free national advisory service on 1300 208 582 from Monday – Friday 9am-5pm (AEST).

It’s important to undertake your advance care planning while you’re still in good enough health to make reasonable decisions and communicate them clearly. It’s important to note that if you lose capacity, for example, due to dementia, won’t be able to make a legally-binding Advance Care Directive. So it’s important to plan early.

Advance Care Planning Australia is supported by funding from the Australian Government. Names and identifying details have been changed in these stories to protect privacy.

23-27 March is National Advance Care Planning Week. Click the button below for more information and to find an event near you! You can also access relevant forms for your state or territory and request a free email pack.

Have you made an advance care plan? Do you trust your loved ones to know exactly what you want at the end of life?