Prepare for take off! This grandmother turned a plane into her dream home 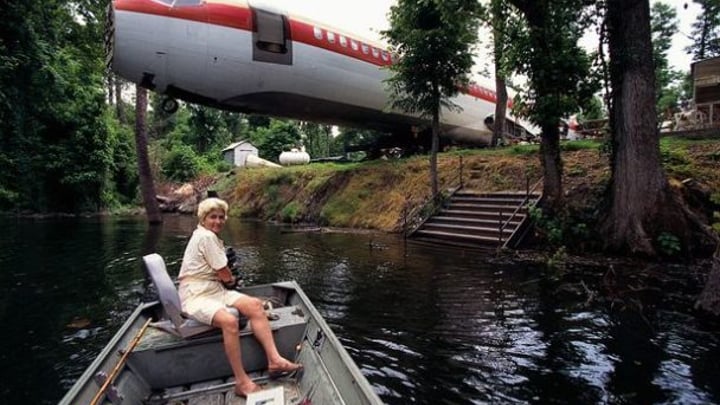 Jo Ann Ussery was 52 when she purchased the retired plane for just $2,000. Source: Getty

Downsizing has become somewhat of a rite of passage for retirees, right up there with living out the grey nomad dream and spending extra time with the grandkids.

While the term ‘downsizing’ might conjure up images of moving into a cosy little two-bedroom unit close to shops and parks, one grandmother in the United States has taken a different approach. Jo Ann Ussery, a hairstylist from Mississippi, turned an abandoned Boeing 727 passenger plane into a three-bedroom dream home, complete with hot-tub.

Jo Ann was 52 when she purchased the retired plane for a measly $2,000 after her mobile home was destroyed in an ice storm. She then spent roughly $30,000 setting up and refurbishing the 42 metre-long aircraft, which she had positioned on her property with the nose jutting out over a lake to give the impression it was in flight.

While she left heating, plumbing and electrical elements to the professionals, Jo Ann completed the rest of the transformation herself, creating three bedrooms, a lounge, kitchen and laundry, while retaining the plane’s original toilets and converting the luggage compartments into storage. Her home also has airconditioning, an oven, washing machine and dishwasher.

President Donald Trump was an inspiration for the plane, which she named ‘Little Trump’ after the then-business tycoon’s $16 million corporate jet. She once described the converted plane, which she moved into in 1995 as the “best home in the world”.

Speaking to the Today Show, Jo Ann said: “My grandchildren love running up and down. And my friends love parties here — but there aren’t any flight attendants to serve their drinks!”

She even told the programme she hoped to buy a Boeing 747 in future because they have two floors and “I want to go upstairs to bed”.

After opening up the unusual home to the public, Little Trump fell off a transport truck in May 1999 and was damaged. There are varying reports as to whether Jo Ann still lives in the plane.

What do you think of this story?