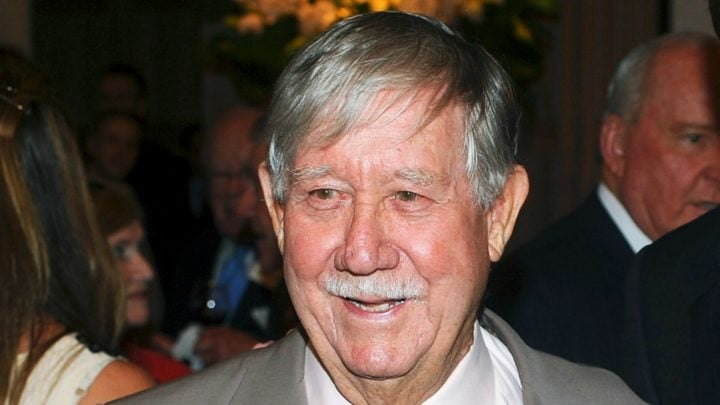 A man claiming to be the long-lost son of late Australian media mogul Reg Grundy has joined a court battle over his $880 million fortune, according to an exclusive report by The Daily Telegraph.

The man, known as Simon Thomas Russell, has joined Kim Robin Grundy, more commonly known as Viola La Valette, in challenging her father’s widow Joy Chambers-Grundy for a share in his estate. It was previously thought Grundy had just one child, with The Daily Telegraph reporting Russell has commenced legal proceedings to search for a biological sample that would prove he’s Grundy’s son.

Grundy, who was responsible for shows including Neighbours, Perfect Match, Sale of the Century and Wheel of Fortune, died in May 2016 at the age of 92 – leaving the majority of his estate to his wife.

A previous report by The Daily Telegraph claimed his daughter was chasing access to documents about his mental state and health before he passed away.

La Valette, who is Reg’s daughter from the first marriage to Patricia Lola Powell in 1954, appeared in NSW Supreme Court last August to formally contest the will. Her barrister Michael Meek SC reportedly claimed there that Grundy suffered “Alzheimer’s disease and cognitive impairment” before he died. La Valette had been estranged from her father for 22 years.

Chambers-Grundy previously claimed her husband had always supported his daughter and allowed her to live a glamorous lifestyle where she never had to work and could live in five-star hotels.

Alzheimer’s disease is one of more than 100 types of dementia, and how the condition progresses is entirely individual – essentially meaning it’s impossible to know with certainty when someone may lose their capacity to make important decisions. ‘Capacity’ itself is a legal term that broadly means you’re able to understand decisions about matters that impact you, can voluntarily make those decisions, and can communicate them to others.

It’s vital to put firm plans in place while capacity exists. In fact, it’s too late to attend to legal matters if dementia has progressed to the point where mental capacity is lost. A will can be contested on the grounds the person didn’t have capacity at the time it was signed, which makes a will one of the most important pieces of financial planning to attend to in the early stages of dementia.

It’s unclear at this stage whether Grundy had capacity, or if he had Alzheimer’s at all. The case is expected to return to court next month.

Have you been following this story? Have you ever experienced a legal battle over a loved one’s will or estate?