Looking back at the outdoor game of skill, JARTS 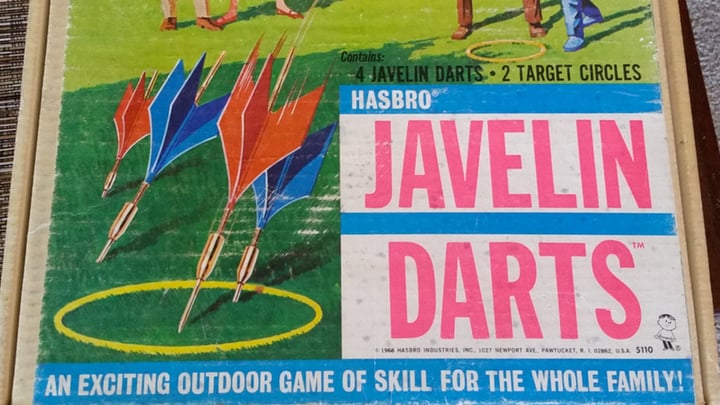 The actual game of JARTS, or lawn darts as they were also known, was first sold in the 1950s but took off as a fad in the late 60s early 70s. Looking back at the design it’s now easy to see how in hindsight they were a disaster waiting to happen.

Originally the JARTS were made with a heavy metal point, like a javelin, and wings like a standard dart you would see in a pub, but bigger. Two targets would be placed on the lawn, similar to horseshoes, with the aim to get the darts to the target by flinging them in the air.

Lawn darts became a cause for controversy in the late 70s due to a large number of accidents. They were even banned in some places until the ban was challenged in court and the item was allowed to be sold again.

The game once again rose in popularity until the mid-80s where it was once again banned after more injured and even a few deaths because of the game. Over 6,000 people were hurt playing with the game and the metal design of the game was banned for good in 1988.

Shortly after a soft plastic tipped version made its way into the market and there are even a few versions made with beanbags. However, for the traditionalist, manufacturers found a loophole to still sell the product as a “build it yourself” version. Because for some, they were happy to risk the dangers of this traditional family fun game. As long as the remembered to have the team leave the other side before they took their turn.

Do you remember the hours playing this on a sunny day? Perhaps it was a game that was brought out for family gatherings. Did anyone you know get hurt playing lawn darts?