This one life: Celebrate the small things 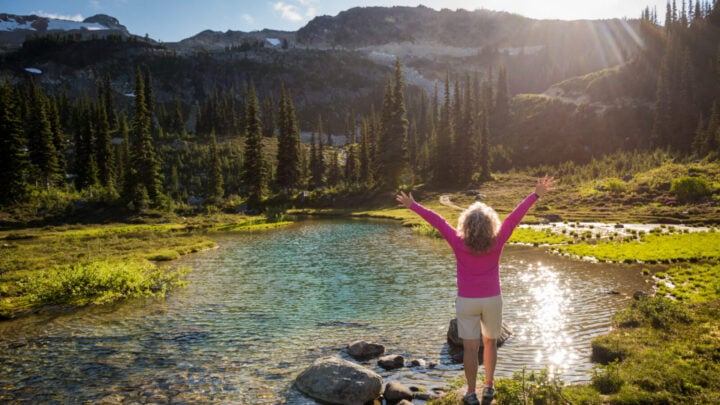 Community contributor Robyn Flemming shares a very personal, very funny recount, reminding us all to celebrate the small things in life; a MUST read! Source: Getty

My 60th birthday celebration looked nothing like my 50th. At 50, I’d needed all the big guns: a themed party with everyone I knew who lived within cooee of Albury-Wodonga, the hometown I’d returned to on my knees seven years before; a Supremes-lookalike tribute band from Melbourne; a bouffant wig and a slinky black outfit. I’d recently quit smoking, but alcohol was still a daily necessity. Had anyone looked closely enough, they might have seen the fear in my eyes.

Ten years later, in 2012, I celebrated becoming a 60-something with three friends in a diner on New York’s Upper West Side. The sun hadn’t long risen over Central Park, where we had run a 10-kilometre circuit while most people in the city still slept. My birthday outfit was black leggings, well-worn ASICS running shoes, my 2010 New York City Marathon race T-shirt, now sweaty in the armpits, and a tiara. I was fit, feeling fabulous and was finally free of an addiction to alcohol that I’d struggled for two decades to manage.

Sixty? Bring it on!

Later that month, as New Yorkers were deciding on their costumes for Halloween, I packed my suitcase and flew to Ireland where I was entered in a 25-kilometre race. The only competitor in my age group, I automatically scored a first place. My prize was a basket of cosmetics for ageing skin.

I had been a single, self-employed global nomad for just over two years. For the past 14 months, I had also been learning how to live comfortably in my skin as a sober woman. What experiences and challenges would life put in my path? Would I face them with dignity, self-respect and courage?

When I was 58 and still drinking, I’d found myself in the Malaysian state of Sarawak, known for head-hunters, orangutans and white rajahs. A new friend, Jackie, introduced me to Josephine, a beauty therapist. I was planning a reunion in the nether regions of Queensland with a man I’d known since we were in our twenties. When Tom and I had first met, my skin was young and didn’t yet hold the dent when pressed. My nipples had been perkier, and my gums hadn’t started to recede. Josephine looked me over. ‘Your breasts could be plumped up a bit. I’ve got just the thing.’

Jo’s home salon resembled a medium-sized intensive care unit but smelled of lotions and potions. She hooked me up to a kind of breast pump. The regular, gentle chugging reminded me of my Uncle Frank’s dairy farm, in regional Victoria, which I had visited regularly as a child. I would hover at the edge of the milking shed, careful not to step in fresh cow manure, and watch Frank attach to his cows’ teats cups similar to those that were now attached to mine.

The following Saturday, Jay, a Canadian forestry expert who had retired to Sarawak, organised a hike in search of a lost antimony mine. It sounded like something out of Raiders of the Lost Ark, but instead of locating an abandoned mineshaft, we spent three hours wandering through a leech-infested swamp. The peace of the forest was shattered by our intermittent screams.

Walking along a trail behind Jackie, I had a disturbing sensation in the region of my recently groomed crotch. I put my hand down the front of my walking trousers, pinched hard, and pulled out a small, black, squishy mass. It seemed like the tail end of something.

On hearing my scream, Jackie turned back. She dropped to a crouch in front of me and brandished a can of some type of critter zapper. I pulled down my pants and poked my pelvis in her face. She pointed the nozzle at my privates and pressed hard, releasing a stream of vapour. My screams soon turned to giggles.

A month later, I was in northern Thailand for some dental work. I’d been having uncomfortable sensations in my groin area. Googling ‘leech in vagina’ was a very bad idea. I heard that a nearby hospital had a good reputation among local expatriates and fronted up to get my itch checked.

At the general admissions desk, I couldn’t make myself understood. On a piece of paper I drew a diagram with a stick figure, and an arrow pointing from a thick black squiggle to the crotch area. The girl nodded as if this was something she saw routinely and pointed to a sign that said, ‘Obstetrics and Gynaecology’. There, I again produced my drawing. A nurse showed me to an examination room, handed me a robe, and waved her hand in a way that I understood to mean that I should remove my clothes.

A young male doctor knocked and entered. ‘How can I help you?’

‘Ah … I will look. Sit in the chair and put your feet here.’ He gestured at a pair of stirrups. Seating himself on a stool between my spread legs, he switched on a headlamp, picked up a probing instrument, leaned forward and started to poke around in my elderly innards. After a few minutes, he sat back. I was relieved to see that he was smiling broadly.

The absence of a very small thing was much to celebrate.