The Screen Critic: ‘Don’t worry Darling’, we’ve got you covered 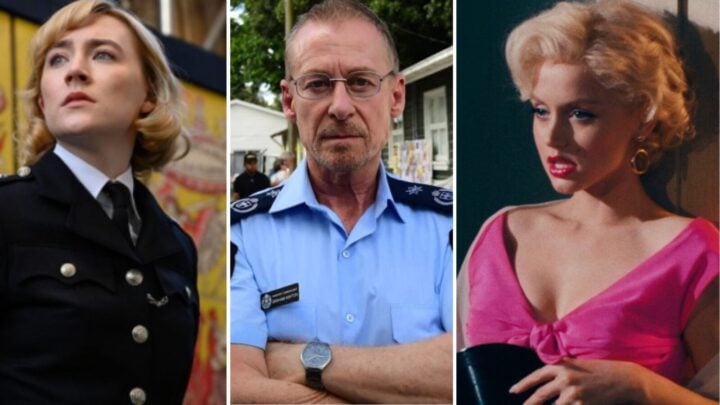 Up for an armrest-clutching, nerve-racking experience? Then Fall is bound to hook you from the get-go as two girls with a great sense of adventure but little common sense, decide to scale an abandoned, decrepit 600-metre TV tower in the middle of nowhere.

As they climb, bolts shake loose and ladders fall away, stranding them at the very top of the rickety needle with no mobile signal, no way down and only a flock of hungry vultures for company.

What makes this survival thriller so tense is the stunning cinematography, which uses actual locations rather than visual effects to create a vivid sense of extreme height, especially when looking down. If you’ve ever wanted to know how vertigo feels, Fall will make that happen.

Having great fun with an old-fashioned whodunit is See How They Run, a very funny murder mystery set in the beautifully recreated West End of 1953 London where a world-weary detective (Sam Rockwell) and his enthusiastic but inexperienced partner (Saoirse Ronan) investigate the murder of an American film director (Adrien Brody) who is trying to make a film version of Agatha Christie’s hit murder mystery Mousetrap.

Graced with terrific ensemble performances, the film merrily plays with the clichés of the genre, rousing a decent number of hearty laughs as the hunt for the killer follows a trail of clues strewn with some ripe red herrings. What a romp.

For another deeply enjoyable mystery, check in to The Resort, a nimble eight-part comedy series on Stan about a married couple who, while on their 10th wedding anniversary in Mexico, stumble upon an unresolved missing person’s case from 15 years earlier.

While on a cycling joyride Emma (Cristin Milioti) takes a tumble and finds an old flip phone, the contents of which reveal tantalizing, though incomplete, clues as to what happened to its owner.

With her husband Noah (William Jackson Harper) reluctantly in tow, they do what all amateur sleuths do; namely, stick their noses into unwelcome, often dangerous corners.

Lots of twists and surprises spice the story, which serves up a genuinely unpredictable finale. Fun stuff.

Not so fun is Don’t Worry Darling (opens 6 October), a dour dystopian drama about the inhabitants of an idealized 1950s-themed town in the middle of the desert.

Each morning the men scoot off in their immaculate vintage-era cars to do mysterious work for “The Victory Project” while their prim, beautiful wives clean the house, drink martinis and get pampered.

All seems perfect until Alice (Florence Pugh) begins to suspect something is amiss, especially with Frank (Chris Pine), the town’s charismatic creator.

If only the film was as intriguing as the premise. Unfortunately, very poor direction from Olivia Wilde (who did such a good job with her debut Booksmart) results in an overlong dirge that simply becomes dull.

The real-life horrors and fallout of the Bali bombings – that claimed 202 lives, including 88 Australians – are vividly recreated in the very fine, often confronting four-part Stan series Bali 2002, which recounts the terrorist atrocity from several personal and political perspectives.

Heading a raft of top-shelf performances is Richard Roxburgh who presents Graham Ashton, the Australian Federal Police Commander, as a man caught in a fragile position as he deals with the sometimes-difficult Indonesian authorities in the hunt for the perpetrators.

Alongside the investigation are engrossing storylines delving into the recovery of survivors, with emphasis on the debilitating psychological toll of long-term trauma.

Covering multiple angles of the event – including that of the terrorists who explain their motives for mass murder – Bali 2002 does an honourable, often compelling job dramatizing the attacks and their far-reaching consequences.

Never mind what you might have heard, the portrayal of Marilyn Monroe by Ana de Armas in the much-touted Netflix film Blonde is perfectly fine.

She certainly looks the part of the iconic sex symbol and, by and large, sounds the part, with none of the glaring slips into her native Cuban accent some cynics have carped about.

That said, the 167-minute opus, written and directed with an art-movie mindset by Andrew Dominik (Chopper) is heavy going.

Impressive as Ana de Armas is, the Marilyn she inhabits is one sad soul, forever pining for the love of her absent father, even as she achieves huge popularity in Hollywood.

Caught in an emotional holding pattern of unrelenting misery, poor Marilyn spends much of the film moping, crying, screaming and throwing on-set tantrums.

She’s a pretty joyless character, making the film a little tough to endure, at least in one sitting. (Handy suggestion: take a break each hour or so.)

Alternating between monochrome and colour, with the frame ratio jumping from widescreen to square, Blonde certainly has a distinctive and stylish look that suits its intimate tone. Aside from a few wide shots of streetscapes and crowds, the drama is kept to a small scale. There are rarely more than a few other people sharing the frame with Marilyn, if any. Much of the time she’s centre-frame and solo.

For anyone expecting a bio-pic, it’s important to note that Blonde is a strictly fictitious affair, based on the 2000 novel by Joyce Carol Oates.

Hence, many milestones in Monroe’s career don’t get a mention. Her culture-shifting appearance in Playboy, for instance, is totally absent.

That’s a little disappointing, yet while Blonde is not-quite-spellbinding, its regular stylistic gear changes complement the allure and mystique Ana de Armas brings to Marilyn.