Sassy at seventy: Something to chew on 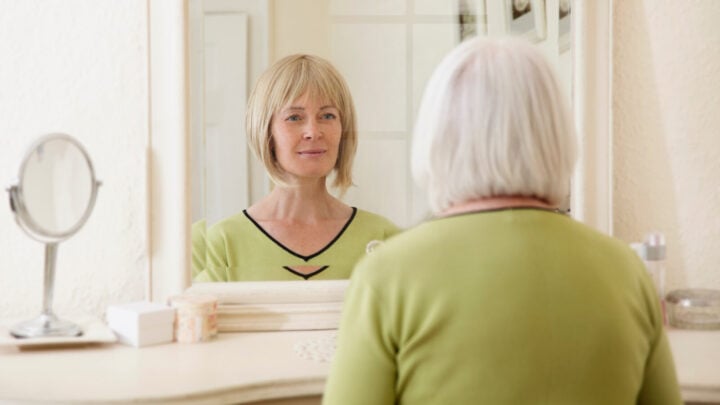 Mirrors should be hidden when you reach 60. Source: Getty

Mirrors should be banned for over-60s. That way we can slide happily into old age thinking we are still as youthful as we were before we hit that birthday.

Okay, so that’s a delusion. If I did think that, then I’d like to keep a mirror around to reassure me that I wasn’t sliding quickly into decrepitude. Like Sleeping Beauty’s step-mum. Now there was a woman with issues.

Last month my mirror gave me a fright. Usually, I only look intently at it in order to pluck stray chin hairs, moan that my eyebrows are going white or disappearing, pat concealer into the under-eye dark shadows that are more cavern than bags, and try desperately to trace a line onto lips that long ago lost their definition.

But then I saw it.

My teeth had moved!

Not just a smidgen. Not a slight little twinge to the side that could, maybe, if I lied to myself, look kinda cute. No. One had decided to go rogue and cross over the other. And the one next to it was doing the same! And these are not my bottom teeth that aren’t revealed when I smile, no, these are the top ones that bounce out and say, “Look at me!”

At my six-monthly dental checkup three days later, I pointed out this horrible state of affairs to my dentist. The sighs of sympathy and words of reassurance I was expecting didn’t eventuate. She grabbed the offending teeth and tried to pull them out of my head. Well, that’s what it felt like. “There’s some movement there,” she declared. “And some slight inflammation in the gums.” I asked if my jawbone could be shrinking. “It could be,” she shrugged.

Now, I don’t know about you, but I want my dentist, like my doctor, to have some kind of bedside – oops, chairside – manner. I don’t expect her to ooze sympathy, but I’d prefer she didn’t smile as she doomed my mouth to look like a crowded peg basket.

She was a new dentist in the clinic, the previous one having flitted off to Melbourne just when I’d spent two years training him to put up with my tendency to dig holes in the chair rests with my nails anytime he started drilling. And I was amazed at how quickly he learned to interpret my gargled pleas not to drown when he was cleaning my teeth with what felt like a fire hose. I know he’d told me to raise my hand if I needed him to stop, but by that time I would have gulped down enough water to float the QEII in my stomach.

Faced with the prospect of having my teeth growing into a squashed version of bowling alley pins, I turned to Dr/Dentist Google for help. I discovered that your jaw narrows as you age, which can push your teeth forward. If the teeth have nowhere to go, they vie for whatever position they can get. A bit like wanting to be the first in line for the Boxing Day sales.

I also found out that this potential for teeth to crowd can be caused by gum inflammation, teeth grinding or clenching, and your tongue pushing against your front teeth. All of which had me paranoid for several days as I poked my tongue around my mouth to see just where it went, searched the mirror for signs of inflammation, and gave myself whiplash every time I flung my mouth open when I thought I might be clenching my teeth.

My mother thought chocolate was a food staple (yes, we know it is, but don’t tell my dentist). Consequently, by the time I was in my twenties, my teeth had become the receptacles of so much amalgam it’s a wonder Gina Rinehart didn’t take out a mining license on my mouth.

I remembered that amalgam is a combination of metals such as silver, mercury, copper, and tin. Which led to another trip to the mirror to see how many of these fillings had been replaced with composite ones that are more commonly used these days. Most of them have been. Whew! Again, my thanks to Dentist Google for this reassurance.

The marine world has this teeth problem all sorted. Baleen whales have a fibrous bone, sharks’ teeth keep growing and replacing themselves, fish don’t live long enough to worry about it, and it would take a propeller to dent a turtle’s beak.

Dolphins, on the other hand, get one set of teeth for life, just like humans do. I wonder if they’d like my mirror…