‘My memories of Melbourne Cup day and the Grandview Road Girls’ 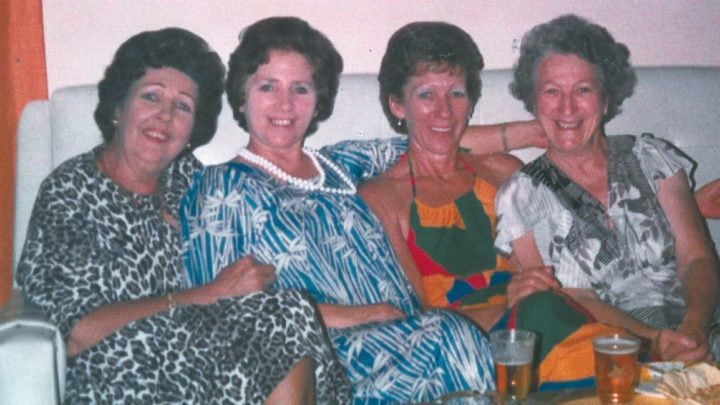 I have many memories of the ‘girls days’ Mum used to have, particularly Melbourne Cup Days. I’d be out most of the day with my brother, Clive, and friends, and would come home on my bike up the concrete driveway to discover Mum and her friends, ‘the Grandview Road Girls’ (more about them in a minute) and Nana all burnt as toast sitting around outside listening to the transistor radio with a stack of empty beer bottles on the ground. The bottle-oh still used to come then, lucky for Dad!

Cup Day was, well, full on at our place! Mum used to rope me in to help make ‘nibblies’ — lots of cheese squares and sliced gherkins speared on toothpicks stuck into a pineapple. And sandwiches cut into triangles with shredded lettuce drizzled over the top. A tray of sausage rolls, fresh out of the oven, had to be surrounded by parsley before I was allowed out the back door to play ‘waitress’.

Nan loved Cup Day and still utilised her phone-bookie from the shop days. All the girls would be at her for tips and best wagers. “C’mon Beau, who do you fancy in the 5th?” The phone would be tied up for ages, much to Dad’s chagrin.

The night before the 1963 Melbourne Cup, Nan had a dream, and fully believing that ‘this was an omen’, dutifully followed up the next day with the outrageous bet of “10 pounds on the nose for a straight win” on a jockey with ‘double initials’ riding a horse with ‘a double name’. She had no idea what this all meant until Dad was summoned to go and buy the paper.

The jockey turned out to be Jim Johnson riding a horse called Gattum Gattum and when it flew past the winner’s post, Nan shouted everyone to as many drinks as Dad could carry home from the pub! I don’t recall how much she won, but it was an awful lot for just one horse race.

Clive and I scored a 10 shilling note each, and all the grown-ups got fearfully drunk, eventually dancing around the backyard in a mess of arms and legs. Phew, what a day that was!

Mum and Dad had two groups of friends who never mixed. There were ‘the Trish and Frank’s crowd’ in Essendon, and the local Grandview Road Girls in Niddrie. They became involved with the Grandview girls because my brother and I used to go to school with Dulcie and Don’s kids, Suzanne and Gary. As is the way, the parents had to mingle at some stage or another.

Dulcie and Don lived diagonally across the street from her sister Joy and husband Ron, and their two kids Paul and Rhonda. Joy and Dulcie got into the habit of nicking over to each others’ houses in their dressing gowns for a morning ‘quiet cuppa’ once the kids had left for school, and it became quite the norm in Grandview Road to see a gaggle of women standing in the street in hair curlers and dressing gowns.

Also in the scenario was close neighbour Rita and, just a few doors away, Kath. Both were members of the dressing gown set too. I didn’t know a lot about Kath but whatever, the Niddrie coterie of Mum, Dulce, Joy, Rita and Kath, would often be found at each others’ houses at various times during the day.

Often they’d have a ‘perm day’ using the new-fangled ‘home perm kit’ — a smelly and time consuming job. Tiny little rollers with their rubber bands that would tweak hair mercilessly and a large supply of fiddly papers, the day would be taken up with drinking, hair-fiddling and gossip. After more than a few beers — the drink of the day (Fosters or Abbots lager), Dad would get a call at work, “I’m at Dulcie’s, can you pick up some grog on your way home.” Then the ‘girls’ would kick on relentlessly.

Dad would arrive after a hard day at work, shuck off his tie and pour beers. Don would come home and change, Ron would arrive over the road and change into shorts, and before you knew it, they were all together and it was full on drinkin’ time. The Girls would show off their new hair, the music would go on and us kids would be shunted down the street with a one pound note to buy fish and chips and cigarettes.

What was ordinary and commonplace mid-20th century will never be seen again. It was a very different world back then.

Do you have any memories like this from your childhood? Do you celebrate the Melbourne Cup?