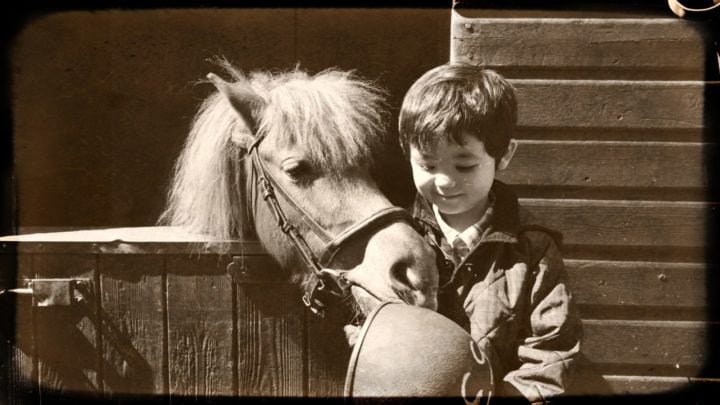 Annie wanted her son to have better opportunities than she had growing up. (Photograph posed by model.) Source: Getty Images

When my son was born, I made a commitment that he would have a pony growing up, just like I did, except I wanted him to have a better one than I ever did. I waited until he was four years old before I started my search and I knew I’d need a decent amount of money if I was going to deliver.

I found a job picking strawberries, but it paid an absolute pittance. I think I got sixpence for each punnet we picked and filled. If we worked really hard we could earn 10 shillings in a morning.

There were four of us from our district, we travelled in two cars, taking our children with us. The children were all good, they sat on a rug at the end of the strawberry patch, playing well together with the toys we took with us.

Picking the strawberries was backbreaking and knee numbing! Even if we wore protection on our knees, it was very painful after a while. We crawled along on our hands and knees, picking as we went. In front of us we pushed a crate that held, if I remember rightly, six punnets, then we had to walk to the packing shed to swap the full crate for an empty one.

My goal was to earn 50 pounds. That was the least I’d be able to spend to buy a pony, not a flash well-trained pony, but one that wasn’t half dead either. It would be better if I could afford 60 pounds, but I aimed as low as possible, it was going to take me forever to save. I did manage to filch a pound once in a while from the housekeeping and I did some sewing for ladies too.

Finally I reached my goal but was presented with another option. The manageress at the strawberry patch, Leigh, said she had an old pony her kids had ridden when they were young and I could have it for free, but it was old. She told me it probably wouldn’t be very willing to move on it’s own, but if I had a horse to ride, that pony would be happy to come along. It sounded like a good start, so I changed my search and found an old retired trotter for 25 pounds.

When I contacted Leigh to collect the pony she had offered me she said her kids didn’t want to give the pony away. I was shattered. Now I had no pony and a horse that was totally unsatisfactory for a little kid. While I returned to my search, my son was able to ride the trotter in a small paddock where it couldn’t bolt. He could only walk the horse because to go any faster would have left him out of control.

Over the next two years I must have spent as much on petrol searching for a safe and suitable pony, than a pony would have cost. I took a number of ponies home on trial, and a week or so later returned them as being unsuitable.

I found Dandy, but when I took him home I discovered he bit children. If you’ve ever had a bite from a horse, you’ll know how uncomfortable it is.

I took Dandy to a horse dealer, and swapped him for Ringo. Ringo was a character, and for a more experienced rider he would have been ideal, but he was too young, as were most ponies in my price range (either that or too old!). Ringo found his way back to the same horse dealer and was swapped for yet another one, and so it went on. My trips to the dealer became fairly regular. I also inspected and rejected quite a few ponies that were for sale privately.

Eventually both my kids were at school, I could go out and get a job that paid more. I took a job as a typist in an accountant’s office that paid $1 an hour. (We’d changed to decimal currency in New Zealand just as my second son started school.)

One of the clients, Joe, had two sons who were very good horse riders and we often talked horses. He came in one day to tell me he was thinking of selling Prince. “He’d be ideal for Chris,” he said. He suggested I take Chris to pony club, which would be held on his farm, the following Sunday. I fell in love with Prince as soon as I saw him, he was absolutely ideal, but too expensive. Joe said I could pay him off, so I took him up on the offer.

At pony club, there was jumping or games. My son wasn’t experienced enough to jump, so he joined in the games. One of the games involved weaving through a series of poles, which we called ‘bending’. Although Prince was an expert at this one, Chris wasn’t and neither was he secure in his saddle. As Prince took off between the poles, Chris’ legs flapped around. There wasn’t much room between horse and pole and unfortunately, Chris’ leg got stuck on the wrong side. He was pulled from the saddle and was left clinging to the horse’s neck to avoid falling. In the gallop, the horse stood on Chris’s leg. An ambulance was called and my son was taken to hospital.

The horse hadn’t done anything wrong.

While Chris was on his way to hospital, I loaded Prince into the float. I left him in the paddock near our house while I went to see my son. There were no phones in those days, so I had no way of knowing what was happening with Chris and neither was I able to let my husband know what had happened.

Chris had been admitted to the accident and emergency department. I found him in a cubicle, waiting to be taken for an X-ray. Fortunately there was no internal damage and I was able to take him home, albeit a very black and blue little boy.

The next day, his first question was, “Can I go and ride Prince?” Despite the accident he was untroubled. I breathed a sigh of relief.

Having that horse changed out lives considerably. Instead of spending out weekends looking for a suitable pony, we were travelling to sports days and gymkhanas. I loved seeing Chris’ improvement as a rider; he was soon jumping and he learned to keep his legs tight to the saddle. He became so good he won selection to an interclub competition and we travelled hours to get him there.

At the competition Chris had a fantastic time. He was placing in the first three riders in most of the events and finally it was time for the bending tournament. In the heats he was out front by several lengths. Then, he lined up for the final. He was in the lead again as he went past the final post, but the result showed he had come second. That wasn’t right. His team captain protested, but the results stood. There was disappointment all round that day.

Despite my father never supporting my love of horses or desire to have them, I gave Chris nothing by my full support when it came to him and Prince. We enjoyed spending time at shows, competitions and riding club. However, there came a day when I knew Prince wouldn’t be part of our family anymore.

We’d been at a gymkhana and Chris and Prince had performed well. Chris had been singled out to compete in a jump above his level. Prince was 13.2 hands (54 inches or 1.38 metres tall in today’s measurement) and some of the obstacles were more than a metre high. I wasn’t sure they’d make the jumps, but they did. On the penultimate jump, a huge og, Chris lost his reins and leaned forward to get them. Prince veered to the right just as the jump approached and as Chris was forward. He went over the jump, but I thought I saw his legs tangled in the reins.

After we’d had a break for tea, we went to load everything up and head home. Prince couldn’t walk. The horse was totally stiff. With the help of some men, I got him into the float but it was a slow drive back to our paddock that afternoon. We got the vet out who diagnosed him with azoturia, a disease normally caused by too much hard feed, then too much hard work. I couldn’t think how that could be the case with Prince, he didn’t get a lot of hard feed, just a handful or two. But then the truth came out. We’d been talking to a previous owner who had mentioned to Chris that he’d have to give him a bucket of oats to get some energy out of him. Chris took it literally, and without telling me, he was doing just that, giving Prince a 9-litre bucket of oats every night.

The vet medicated him and gave us instructions of what had to be done for the next few weeks, or maybe longer. I had some grazing on a farm, he wouldn’t need hard feed, there would be enough grass. It meant though, that I would have to travel more than 20 kilometres every day to go and attend to our beautiful pony.

It took six months before Prince was back to his previous health, and by then Chris had outgrown him. I had people lining up wanting to buy him, but in the end I sold him to friends with a daughter who I knew would care for him. They had a farm and he would never need to have hard feed again.

In what ways did you want to do more for your children than had been done for you? How did you give them opportunities you’d missed out on?