‘Why I was disappointed with my DNA test results’ 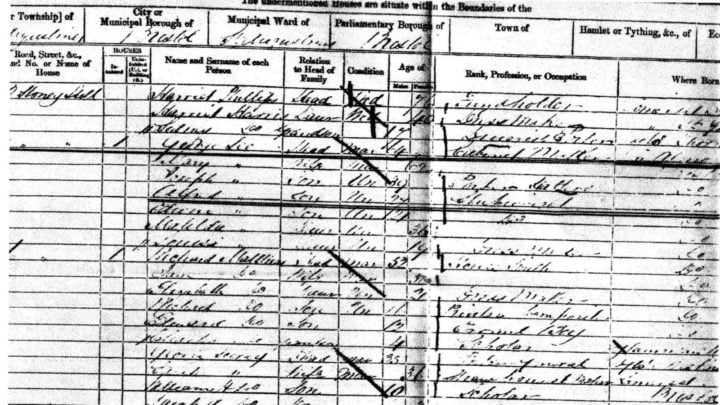 A typical page from the English census indicates how difficult it can be to research. Source: Brian Lee

Last December I had my ancestry done online. The results arrived recently and I was actually a little disappointed. I had been hoping for all sorts of exciting revelations to come out of it, you know, things like my great, great, great-grandfather was a Russian prince who left a fortune in a Swiss bank, which has never been claimed; or something simple like my genes proving I am part Italian, part Chinese, part Hungarian and part Russian, decently complicated proving why I am such a genius at everything I attempt!

No such luck though. Actually, according to my DNA I am 75 per cent English, 20 per cent Welsh and 5 per cent Viking. I’ve actually made that last one up, (‘Viking’). The sheet I received said Scandinavian and that sounded too bland in an already too bland history, so I thought I’d perk it up a bit. I would guess I’m not really too wrong anyway, but the DNA doesn’t go into that sort of detail.

I have to admit, I’m not totally surprised to get this result, I’ve traced my family back to 1700 and every one of them (five generations), lived in the Bristol area, leading pretty mundane lives. To the best of my knowledge, I think my generation is the first that has members who have ventured outside of the Bristol area, and only two of us at that. There’s me of course, getting married and shooting off to New Zealand with Jacqui, then back to the United Kingdom for a few years, then off again, this time to Australia, in 1987, and we’ve been here ever since. Then there’s my cousin Valerie, the other adventurous soul in the Lee family; she got married and shot off in the opposite direction to me — she now lives in America, near New York City.

The rest of the family (that is to say six or seven cousins and four aunts and uncles), all stayed in Bristol. The aunts and uncles are all dead now of course, they’d be over a hundred years old had they lived, and even the cousins who are left are either in their 70s or early 80s, with me being the doyen of the family at 83! I’m not suggesting I blame any of them or think any less of them for staying exactly where they started — I mention them merely to show that the spirit of travel is not particularly strong in my family. From their point of view Valerie and I are the two weirdos of the family for wanting to try pastures new, not them!

Of course, I must have lots of relatives I know nothing about, who may have turned out just as adventurous as me. The only generation I can speak of with certainty are my father’s brothers and sisters and their families (the aunts, uncles and cousins I mentioned above). Dad’s father, Charles, on the other hand, had a couple of sisters I know nothing of or their possible children, then his father, Alfred, had five sisters and four brothers. Go back a step further, to George, and there are another six girls and two boys. It starts to get a bit hazy from here on but the next generation back was my great, great, great grandfather Thomas. He only seems to have had two daughters and two sons. And of course I have absolutely no idea how many kids all these people may have brought into the world! The overall figures do go to show what an immense difference contraception has made in the last hundred years, coupled of course, to the invention of television — that’s something that has kept quite a few husbands and wives out of bed until they were too tired! Who can afford such large families these days, anyway?

It’s easy to write up a whole family in this manner of course, covering a history spanning 300 years, but it has taken me quite a few years to accumulate all the information I have and it’s not been made any easier by the fact that we don’t live in England any more. When we were there, we could visit churches, one of the main sources of information, especially before the census was invented, but the DNA has just put the cap on everything now. I think I have done just about all I need or want to regarding my family origins; I can rest easy!

Except, of course, that Jacqui now wants to get her DNA done and I have a feeling hers is going to be rather more exciting than mine. We’ll just have to wait and see.

Have you had a close look at your family history? What exciting things have you discovered?