Heroic blockbusters and lighthearted fare: From the big screen to the couch 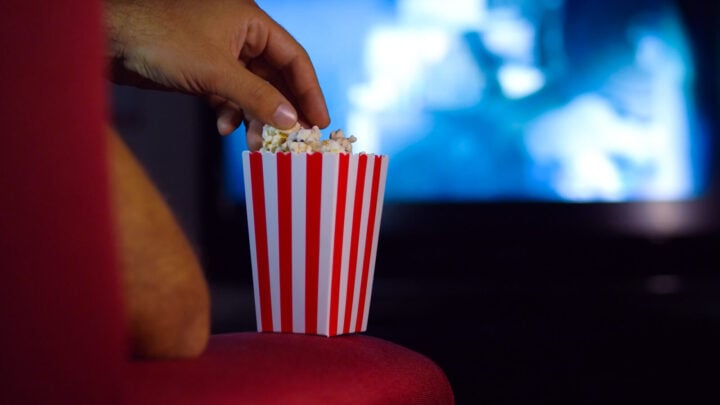 Here's what our screen critic says about the latest releases. Source: Getty

There are lots of laughs to be had in Thor: Love and Thunder, the fourth Thor film and the 29th superhero extravaganza to roll off the super-successful, well-oiled Marvel Studios assembly line and crowd out the planet’s multiplexes, thanks to all that saturation marketing.

As with the previous instalment, Thor: Ragnarok, also directed by Kiwi Taika Waititi, the new adventures of Thor (Chris Hemsworth) have a distinctly comic bent, though now there are so many gags the film often feels like a send-up, with Russell Crowe’s outlandish cameo as Uber-God Zeus looking like it belongs in a Mel Brooks movie.

It’s a fun ride all right, yet the light-hearted tone does drain the film of any dramatic tension, which you need to lend some substance to the visually splashy soiree.

Bound to be one of the most satisfying feel-good films of the year is The Phantom of the Open, a winning British comedy-drama about a loser whose shenanigans turned the golfing world upside down in the 1970s.

Based on a remarkable true story that is truly stranger-than-fiction, ageing crane operator Maurice Flitcroft (superbly played by Mark Rylance) cheekily enters the 1976 Open and quickly becomes famous as the world’s worst golfer.

Proving again how deeply Britain adores its eccentrics, the film is affectionate and funny yet sports a strong dramatic underside as Maurice comes to question his sudden celebrity and the impact it’s having on his wife and three sons.

With a terrific turn from Rhys Ifans as a stuck-up club official, The Phantom of the Open is a warm, uplifting film about chasing your dreams and knowing your limits (opens July 14).

The eventful life and brilliant works of author Kurt Vonnegut are comprehensively profiled in the excellent biographical documentary Kurt Vonnegut: Unstuck in Time, a passion project director Robert B Weide began making some 40 years ago.

Paying all due attention to Vonnegut’s anti-war classic Slaughterhouse Five, the film presents a detailed, absorbing portrait, drawing upon a deep trove of archival material, including the many interviews Weide conducted with the prolific writer over the decades.

While fans will clearly love it, the film will likely be of most interest to those who only know Vonnegut by name, as this very well-crafted bio reveals how much more there was to the affable, irascible, chain-smoking, attention lover.

Of all the long-form offerings on streaming services, two fresh releases stand out.

On Prime is The Terminal List, an excellent eight-part action drama that follows the quest for justice by James Reece (Chris Pratt), a special operations soldier bent on revenge after his team is slaughtered in an ambush he suspects was engineered by various corporate types and military officials.

Balancing the many tautly-directed spurts of action – including a tense cross-country chase as Reece is tracked by a hi-tech FBI team – is the story of dauntless journalist Katie Buranek (Constance Wu), who risks all to get to the truth of what happened on the battlefield.

Above all, Pratt puts in a solid, layered central performance as Reece struggles to cope with post-traumatic stress disorder while fighting to complete his mission, aided by his rogue CIA buddy Ben (Taylor Kitsch).

A warning to the squeamish: as Reece’s mindset moves closer to the edge he becomes ever more determined to make his enemies pay. Hence, the action occasionally involves some pretty intense acts of violence.

Beyond all the shooting and the explosions, what really makes The Terminal List tick is the intriguing back-room drama that slowly unfolds over the eight episodes, drip-feeding us the full picture behind the disastrous mission. It’s top stuff.

The other item on your must-see list is The Undeclared War on Stan. Set in the near future, it’s an outstanding six-part series in which a lowly intern at Britain’s intelligence centre discovers a security breach that threatens to plunge the nation into chaos.

Far from any must-see list, unfortunately, is the latest jaunt from funnyman Rowan Atkinson who isn’t all that funny in Man vs Bee, a nine-episode Netflix comedy that, all up, runs for a scant 72 minutes.

Full of pratfalls and obvious sight gags, Atkinson plays a professional housesitter who comes to grief when a troublesome bee enters the high-end home he has taken charge of.

There are chuckles here and there, but the lark runs dry quickly and will likely disappoint fans of Atkinson. It’s strictly for the undemanding.