‘The surprise secret in my local hardware store’s return policy’ 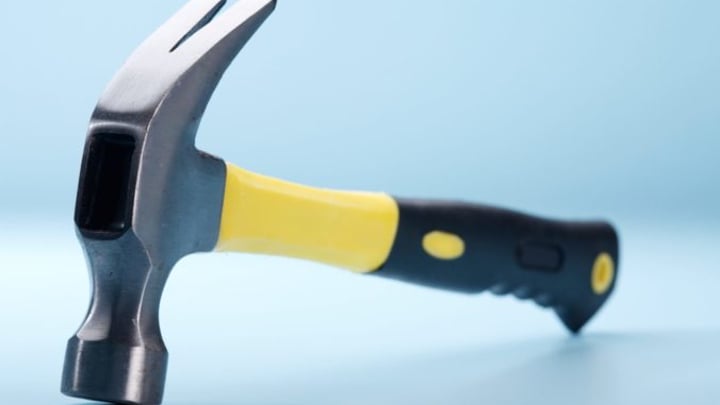 Peter tried to get 10 per cent off his hammer at Bunnings. Source: Getty Images

This is a true story. It happened at my local Bunnings. I rarely go there … except for the sausage sangers.

Recently I entered my local ‘Bunnies’ store. I passed the delicious aroma of the sausage sizzle sandwiches. It’s difficult to go past, especially when one looks at the welcoming smiles of the grey nomads selling sangers for the local seniors’ centre.

I’m on a mission. I have to test out the Bunnies slogan “We’ll beat the price of any stocked item by 10 per cent”.

In my left hand is a bag … a paper bag. No plastic for this little mugwump.

Approaching the door a friendly girl with dark hair, a neat uniform and a 1,000-watt smile welcomes me. “Good morning,” she beams.

“Samantha, can you direct me to the sales returns counter please?” She had a name badge neatly positioned on her left lapel. She really did look smart and welcoming. A good sign, or so I thought.

The smile departed and was replaced by a look of total perplexity. “Returns sir? What might you be returning?”

I pulled it out of the bag. It was shiny new, not an imperfection on it at all. Nicely shaped handle, with a strip of yellow paint near the head to set it off. Any carpenter would be proud to own it.

I handed it to her. She turned it this way and that and then looked up at me.

Still completely perplexed. “Sir, there doesn’t seem to be anything wrong with this hammer.”

The perplexed look grew deeper. “Then why are you returning it?”

“Do you have your purchase receipt?”

She looked uncomfortable. “That makes it hard to give you a full refund, sir, especially when there is nothing wrong with the hammer.” She looked at the hammer again.

She looked at me. “Sir, there is no barcode on this hammer. How can you prove you bought from this store.”

“I didn’t buy it from this store.”

She looked relieved. Then puzzled again. She began twisting the hammer around in her hands. “Ah, from another store.”

She handed the hammer back to me. The smile resumed. I stood there, waiting. She began to look uncomfortable. “Are you waiting for someone?”

The air of mystery resumed. The proverbial penny still had not ‘dropped’.

I decided to let the poor girl off the hook. Probably had not been trained for this scenario.

“You know your motto?”

I quoted the well-known motto, stitched into the fabric of every Bunnies commercial: ‘Find a cheaper item than our stocked item and we’ll beat the price by 10 per cent.’

“Ah, yes.” Her training finally kicked in. “But there’s no barcode on this.”

“Of course not. I told you, I bought it at another store. Here, I have the receipt.” Yes, I lied about the receipt. I did have one.

I took the hardware store receipt out of my wallet and showed her. She looked at it, and handed it back to me. I dropped it into my shirt pocket.

“That price, from my local hardware store, is 45 cents cheaper than the same hammer that you sell.”

A second penny dropped. “Oh, you want to cash in on our Bunnies price guarantee?”

“Oh, sir I can’t possibly do that. I’ll have to call the manager.”

I waited while she picked up a store microphone. “Customer refund required at counter one please, Mr James.”

I waited. She waited. Finally, after many minutes, and I was about to turn and go home, a partly bald man with a beatific smile approached us. He looked as if he might have been my first cousin, or someone to whom I owed a huge debt.

“How can I help you sir?” Mr James, obviously.

The young lady (did I tell you she was Samantha?), explained the whole story to the manager in store technobabble. She seemed terrified and departed to the farthest reaches of the store at almost a gallop.

The man’s smile became a scowl. Then a look of enlightenment crossed his face.

“Please come with me,” he said. Once again, very polite.

I followed him to the tools section. He selected a hammer identical to mine, though the bright yellow paint was green. Its price was, indeed 45 cents dearer than the one I had bought from my local hardware store. “See? Told you!”

“But this is not the same hammer,” he said.

I held the two hammers side by side. They were identical in size, shape, weight: twins except for the strip of paint.

“No sir, this is not the same hammer. Our store hammer has green paint on the handle. This hammer of yours has yellow paint. We have our hammers especially constructed to be distinguishable from those of other stores. So I am sorry, but we cannot give you your 10 per cent.”

He put the hammer back on the shelf, and departed, a smug look on his face. Suddenly I realised that customers of Bunnies were never going to get a 10 per cent refund on anything.

Have you ever tried to get a price match or discount on an item?