‘Do not kiss your child like that’: Mother slammed for kissing daughter on lips 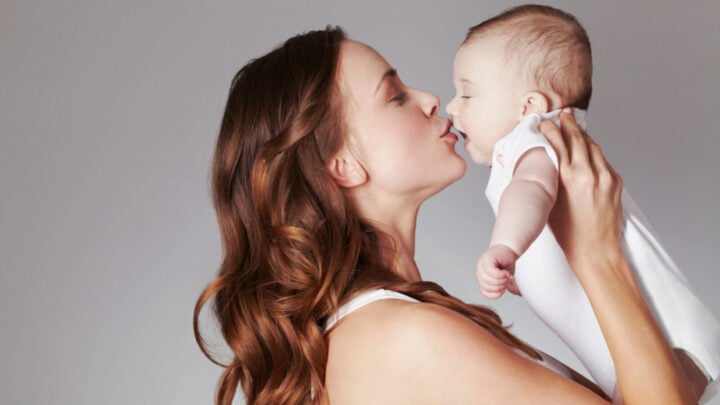 A woman has sparked debate after sharing a video of herself kissing her daughter. Source: Getty (model posed for pic)

Is it okay for parents to kiss their child on the lips? That’s the question everyone’s been asking after a Sydney mother shared a video of herself kissing her young daughter.

In the footage, which was first shared to social media platform TikTok but has since been deleted, the unidentified mother and daughter can be seen holding hands and sharing multiple prolonged kisses with their eyes closed. According to 7News, that has seen the video, the mother added romantic music to the clip and included several hashtags including ‘kids’, ‘kiss’, ‘kiss time’ and ‘mother-daughter bond’.

While many TikTok users found the video sweet, others were shocked by the public display of affection. “Why are you making out with your child on a train? Why?” one person questioned, according to a report by The Sun.

“Do not kiss your child like that,” another is said to have commented. While a third wrote, “Serious question, why did you kiss your kid like that? That doesn’t make any sense to me and I would like to hear your reasoning.”

However, other parents came to the mother’s defence and argued it was harmless. One person commented, “She isn’t even kissing her kid. She is just standing there and that’s her child doing it all. Calm down.”

It’s not the first time a story like this has sparked an online debate. In July 2019, a woman made headlines after she revealed her husband, a man in his 20s, still kisses his mother on the lips.

Taking to online forum Reddit, the anonymous woman spoke of the moment her husband dropped the shocking revelation.

“So my husband and I were recently talking about raising kids and the like. And he brought up how some people are weird about people kissing their own kids on the lips. And I am just like ‘yeah, I could see that’,” she explained at the time.

“My niece went through a phase as a toddler where she would grab my face and try to kiss me on the lips, and I don’t think it’s especially weird for younger kids.”

But the woman claimed her husband then went on to say he still kisses his mother on the lips.

“That’s not normal. I get that it CAN be a cultural thing, but it isn’t here,” she added. “I asked a couple of my friends and they say no. Never would that be normal here. Not for a man in his 20s to kiss his momma on the lips.”

The woman continued: “I still am really shocked that he tried to convince me that it’s a normal thing for guys to kiss their moms on the lips.”

While many parents and grandparents kiss their children and grandkids on the mouth when they are young, the practice seems to fade out as they grow older.

Doctors and dentists have warned against kissing children on the lips because of hygiene. In an article on the Brightside website, the medical professionals advised that a large number of microbes can be found inside our mouths and while these microbes may not necessarily impact an adult, if transmitted to children they can be quite dangerous.

While some psychologists explain that kissing a child on the lips can blur the lines when it comes to the personal boundaries of a child’s body. In 2015, Dr Charlotte Reznick warned parents against kissing their children on the lips because the act was “too sexual”. She told The Sun that because the mouth was an erogenous zone, a kiss on a child’s lips “can be stimulating” and potentially confusing.

Is it wrong to kiss your child on the lips? Or, are these people overreacting?