Sassy at seventy: Kinship with a kangaroo 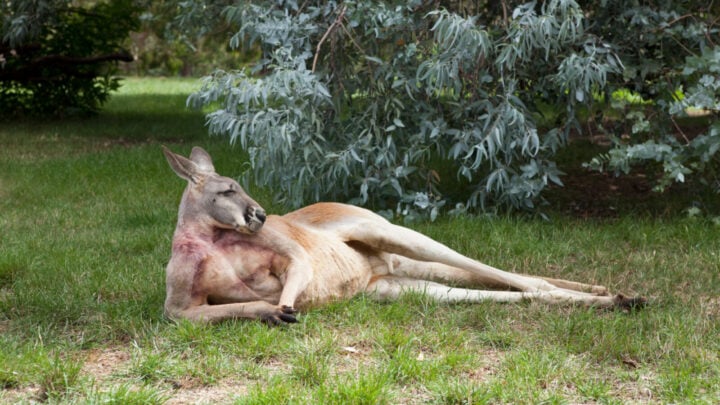 This blogger has a crisis of conscience over a kangaroo she feels a kinship with. Source: Getty

I’m having a crisis of conscience. No, I haven’t inadvertently shoplifted a double-dipped dark chocolate Cherry Ripe, lost a first edition library book or slandered a politician. It’s far more serious than that.

I live across the road from an overgrown paddock that harbours lots of native wildlife, particularly kangaroos. A few years ago I discovered my backyard had been invaded by a mob of roos whose poo ranged in size from marbles to golf balls. This also led to the discovery that roo poo used as fertiliser leads to a crop of weeds that elephants could hide in.

Although the mob left the next day and never returned, the big old buck occasionally did, quietly dragging himself up the driveway and settling on the cool grass, nibbling, sleeping, nibbling. Okay, roos don’t nibble, they pull the grass out by the roots and leave your lawn looking like a green version of Coober Pedy.

So Buck, as I named him, became an irregular visitor. I wouldn’t see him for months, then I would walk out the laundry door with a basket full of washing to find him lying under the clothesline and looking at me as though to say, “You’re not hanging that out today, are you.”

Another time I walked off my patio, knife in hand to cut lettuce from the back garden when he suddenly emerged from behind the garden shed less than two metres away. I don’t know who had the biggest “Oh, sh*t!” moment, but I levitated back onto the patio and he bounced backwards to the shed.

Some months later, he discovered the coolness of overhanging shrubs in my front garden, scratched a nice little bed in the ground, and went to dreamland. I was having some friends over for morning tea so quickly let them know to come in my driveway side door. After morning tea, two of them left, and Buck decided it was his turn to go too. He proceeded to lazily drag himself across the front patio to make his escape over the driveway fence. The fence is low and indents in the garden showed he’d entered that way.

To say his expression was puzzled as he stood and contemplated my friend’s car on the driveway is an understatement. It looked as though he was trying to figure out where this ‘big white thing’ had come from. It certainly hadn’t been there when he’d jumped in. After several aborted attempts to leave via the windy front path, he decided to negotiate his way around to the backyard and out the driveway. My friend decided to quickly drive away before he got there.

I know it’s cruel to laugh at someone’s discomfort but the look on his face as he came onto the driveway and realised the ‘big white thing’ was no longer there was priceless. He stood for about a minute, almost shaking his head, trying to figure out how this miracle of disappearing had happened. It wasn’t quite an “I’m sure I saw a pink elephant after I drank that bottle of champagne” moment, but it was deliciously, gorgeously close.

But, after our most recent meeting – me stepping from the laundry with the washing basket and him grazing a little more than a metre away – I’m contemplating getting a gate to shut him out from the backyard and raising the driveway fence to stop his Olympics in that direction.

This is where my crisis comes in. Buck obviously enjoys the peace and quiet of a patch of green all to himself and not sharing with the does and joeys. If dangling testicles and patchy hair are an indication of age, he should have been on the macropod pension years ago. Which could mean he’s been usurped from the mob by a younger buck and is on his own. So I feel a kind of kinship with him. As we get older our little pleasures seem to get fewer, and if I deprive him of some tasty green shoots I’m going to feel mean. The scrub he lives in is decidedly lacking in tasty greens. It’s more a living testimony to the grit and tenacity of dry, prickly weeds.

I know he’s a wild animal and quite capable of ripping me from throat to toe if he thinks he’s being attacked or feels unable to escape, but the lazy twitch of his ears when I quietly tell him he’s safe and it’s okay for him to massacre my lawn, makes me feel he appreciates the lush solitude I provide.

Ah, well, I always have my dryer.