‘Out of touch’: Anger as Sam Armytage suggests those earning $180K aren’t rich 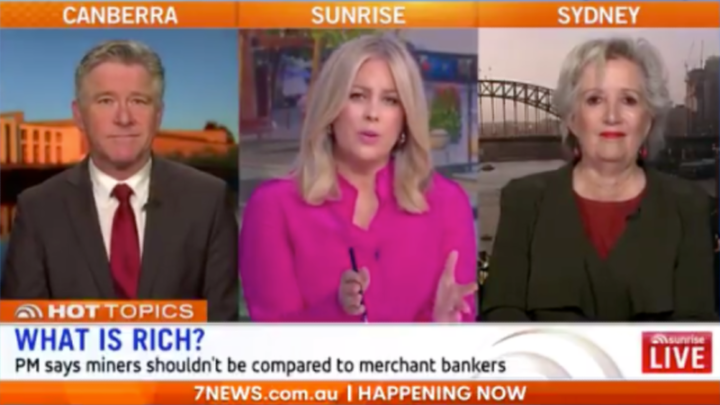 The topic of tax cuts for high income earners was debated on Sunrise this morning. Source: Twitter.

Samantha Armytage sparked an online debate this morning after seemingly agreeing with controversial comments made by Prime Minister Scott Morrison about what constitutes being wealthy. Morrison was discussing FIFO workers on Wednesday, during a tour of north Queensland, when he defended his tax cuts for high income earners.

“I don’t think they should be penalised and treated like they’re some merchant banker in Sydney. They’re not,” the PM said yesterday. “They’re hard-working people, working out on mines and difficult parts of the country. I think they deserve a tax cut.”

Armytage was joined by Channel Seven political editor Mark Riley and social commentator Jane Caro to debate the topic on this morning’s program. “It depends where you live in Australia as to whether or not you are wealthy on that, in Sydney probably not,” Sam, who has a property in Bondi, said, before asking: “Does the prime minister have a point here?”

Riley disagreed and said the PM was simply repeating his “class warfare debate” from his last election campaign.

Armytage went on to say: “$180,000 sounds like a lot but these FIFO workers make huge sacrifices. They are often the sole income earners, [have] a couple of kids, a mortgage.” However Caro responded by agreeing that rich is “a relative term”, saying: “It very much depends where you’re standing when you look at that salary.”

“For the many women over 60 who’ve been surviving on $40 a day on the old Newstart rate, which they may be put back down to under this government, then that’s Everest beyond greatest dreams, $180,000 a year. So it’s all relative.”

Following the segment, many viewers took to social media to debate the comments made by Armytage, Riley and Caro. One branded Armytage “out of touch”, while another chimed in saying: “She’s beyond out of touch.”

One user wrote: “Tell that to someone on the basic wage or welfare.” While another Sunrise follower said: “Channel 7 executives need to make the call and pull Sam off air.”

Another took aim at the PM, writing: “@ScottMorrisonM pulling the class solidarity routine is distasteful and down right offensive. That blokes never done a hard days work in his life, and certainly not an honest one. He is apart of the silver spoon club, grub.” While another said Morrison’s ability to reason “has long been suspect”.

However one thing that was not up for debate was whether FIFO workers deserved the wage they earn, with one person saying: “People become FIFO works to make a lot of money in a short time. They earn it and deserve it. They use it to make hay while the sun shines.”