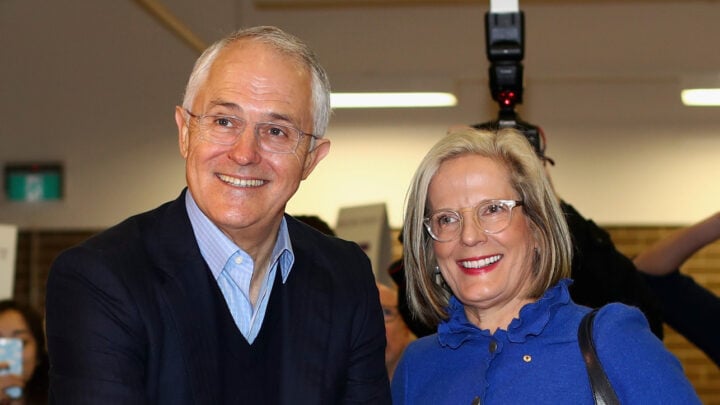 Former prime minister Malcolm Turnbull and his wife Lucy have been vocal about their views on the Australian Club. Source: Getty

Following the controversial ruling that the 183-year-old Australian Club would remain men-only, high-profile Sydneysiders are speaking out, saying the club’s current membership rules raise issues of gender equality and racial diversity. But should the long-standing club change its ways to allow women, or should some things remain divided by gender?

According to The Sydney Morning Herald, the club refused to divulge the final results of the vote, but the publication revealed that 693 member votes were cast, with 62 per cent against allowing women members, 37 per cent in favour and 1 per cent abstaining.

Lucy Turnbull is one advocate who is disappointed that the club chose to remain men-only. As a successful businesswoman and former Sydney lord mayor, Lucy told the Herald the issue was personal, with her father, grandfather and husband all being long-term members. Former prime minister Malcolm Turnbull, who has been a member of this club for 36 years, declared himself a “lifelong feminist” as he entered the Australian Club on Tuesday to cast his vote.

Lucy told the publication that Australian women can be judges, politicians, even prime ministers, yet there’s one thing they’ll never be: a member of the Australian Club. “I have been to the Australian Club only occasionally,” she said. “It has some really good art and [is] worth going to see for that reason alone. But it does not represent contemporary mainstream Sydney — demographically or otherwise. But it never did. That was kind of the point of ‘gentlemen’s clubs’. They can make or change whatever rules they like, it’s a free world.

“But what worries me about this controversy is to think that neither of my granddaughters could ever be a member of this club with the current regime. They can aim to be premiers, prime ministers, High Court judges … whatever, but not members of the Australian Club. Both because of their genders, of course. But one is also Eurasian, which is like a double obstacle in a nation that strives for, or claims to and certainly should [strive for], gender and racial equality. So it is a bit of an anachronism and seems like it will remain so for a little while at least.”

Geoff Cousins, Telstra director and former prime ministerial adviser to John Howard, also hit back at the decision, quitting the club and saying the reasons given for voting no to allow women were “petty” and trivial.

“Most of the people who spoke in favour of it were dealing with the principles of natural justice, whereas most of those who spoke against it were talking about petty things – like if we were having a dinner, we would have to behave differently,” he said. “We would have to change the taps in the club. You just would not believe it. For members in the club to be putting one of the great social justice issues of our times into the same category as the decor of the club — for goodness sake!

“There are people [in the Club] who are still sitting in judgement in courts …. there are heads of corporations who sign off on their annual reports on grand statements about gender equality, yet here they are in this club, voting not to have women there.”

Many have taken to Twitter to share their thoughts on the vote, with a seemingly overwhelming majority against the decision, including one woman who questioned whether any woman actually even wanted to be a member to begin with.

Record turn-out of (male) members to vote NO! to women joining the Australian Club. Warms the cockles. Sounds like a really awesome place. Does any woman actually want to darken this doorstep? https://t.co/uk4NDwRn6J

Columnist for The Sydney Morning Herald and Sun Herald, Peter FitzSimons, also slammed the decision, saying that while he would have forgiven his grandfather for a no vote, he didn’t understand “anyone born after WWII voting against it in the 21st century”.

My grandfather, Frederick Harper Booth, was a long-time member of The Australian Club and would have voted to stay all-male, but I forgive him – he was born in 1878!
I don’t understand anyone born after WWII voting against it in the 21st Century. https://t.co/16EXnsZKDe

“The Australian Club shd [should] rename itself The Australian Men’s Club, or The Australian Society of Misogynists,” another wrote. While one said, “And for sure that decision was made by a bunch of old white guys who are out of touch.”

Some raised the point that women are allowed to have women’s-only clubs, with one man tweeting, “You do know there are similar, ladies-only clubs, don’t you? Should they admit men?”

Do you think the club needs to update its membership guidelines to allow women and all races?