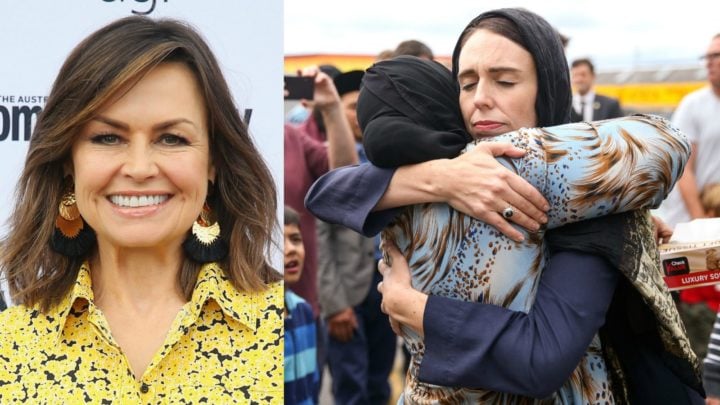 The Project host Lisa Wilkinson has thrown her support behind New Zealand Prime Minister Jacinda Ardern in the wake of the Christchurch terror attack, labelling her “genuine” and “compassionate” leader who should govern both New Zealand and Australia.

In a column written for 10 Daily, Wilkinson praised Ardern for her devotion to her country following the terrifying mosque shootings that left 50 dead and many more injured. The prime minister didn’t waste a moment in jumping to the support of those in Christchurch after the attack, flying to the city to pay her respects and meet with locals affected by the attack.

She was also praised for her immediate action to change New Zealand’s gun laws following the massacre. According to the Herald Sun, Ardern said options included a ban on private ownership of semi-automatic rifles and a government-funded buyback of newly outlawed guns.

Noting the mother-of-one’s “sheer humanity” in times of crisis, Wilkinson wrote that Ardern actually cares about her people, unlike, she claimed, Australia’s politicians.

“There is something about the way Jacinda Ardern has gone about guiding her nation through the eye of such unspeakable tragedy, that has been so uniquely female, so inspirational, so utterly genuine and completely devoid of politics, that women, and men, across the globe have suddenly remembered what real, engaged compassionate and powerful leadership looks like,” Wilkinson wrote.

Wilkinson continued by calling on Australia’s politicians to follow in Ardern’s lead and show some empathy for residents into the future.

“May our own politicians here in Australia, as they stand on the brink of an election, please take notes, learn from her, and try to outdo her, in her empathy, integrity, unity and decisive action,” she added. “But until then, do you think she’d adopt us?”

Wilkinson’s comments follow Ardern’s visit to a refugee centre earlier this week where she gave an emotional speech to mourners who had been impacted by the attack.

“New Zealand is united in grief,” she said, according to Stuff. “This is not New Zealand. The only part of the incident we have seen over the past 24 to 36 hours that is New Zealand – is the support that you are seeing now.”

Ardern has also vowed never to say the alleged gunman’s name, saying in an emotional statement that he is a terrorist that does not deserve to be named.

“He sought many things from his act of terror, but one was notoriety, and that is why you will never hear me mention his name,” the ABC reports she said. “He is a terrorist, he is a criminal, he is an extremist. But he will, when I speak, be nameless.”

She added: “And to others I implore you: speak the names of those who were lost rather than the name of the man who took them. He may have sought notoriety, but we in New Zealand will give him nothing, not even his name”.

The gunman entered the Al Noor Mosque in central Christchurch at about 1.40pm on Friday and opened fire, before driving about 5 kilometres across town and attacking the Linwood mosque.

A bomb was also found in a car on Strickland Street about 4km from the Al Noor Mosque. Four people were arrested, but only a 28-year-old Australian man was charged with murder. He is currently remanded in custody and will appear in court on April 8.

What are your thoughts on Lisa Wilkinson’s comments? Do you think Australia’s politicians could learn something from Jacinda Ardern?