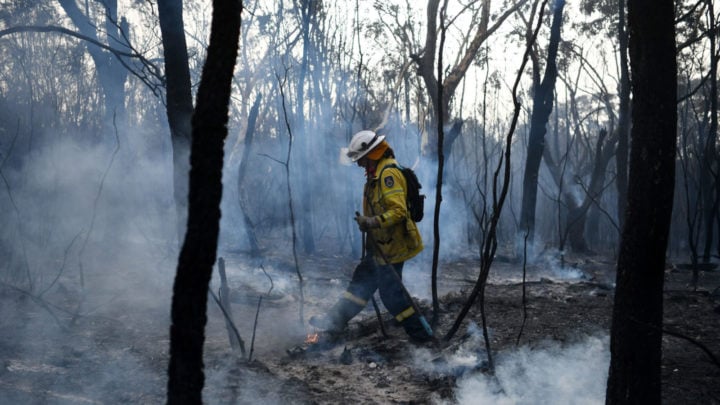 Sherele Moody made the comments during a press conference in Canberra on Wednesday. Source: Getty.

Comments made by a leading domestic violence campaigner have sparked outrage across Australia, after Sherele Moody suggested that some of the male firefighters currently battling devastating blazes across the country will return home and “subject their partners to domestic violence”.

Speaking during a press conference in Canberra on Wednesday, which was recorded by 7News, the advocate commented that women may find themselves in danger when their male partners return home from fighting fires, as blazes continue to ravage New South Wales and Queensland.

“After a cataclysmic event like this, domestic violence peaks,” she said on Wednesday. “Women become extremely unsafe when, generally, the men return home from the fires and subject them to domestic violence.”

Moody says her comments are supported by academic research carried out after Victoria’s devastating Black Saturday fires in 2009. However researcher Dr Deb Parkinson told 7News that although there was a noted increase in family violence within fire affected communities, there was no link to suggest this was related to firefighters.

Sherele, who is the head of the Red Heart Campaign, was also joined during the press conference by Greens Senator Larissa Waters who told 7News after the press conference: “We absolutely distance ourselves from the statement made by Sherele Moody that it is firefighters doing it. She does not speak for us.”
Following the press conference, many people slammed Moody’s comments, including One Nation leader Pauline Hanson who recorded a video in which she described the campaigner’s words as “hateful” and “twisted”, inviting her followers to “make their own minds up” about the comments.

“I don’t know about you, but i’ve had a gutful of these man-hating women out there making their comments,” the Queensland Senator said in the video shared on her ‘Pauline Hanson Please Explain’ Facebook page.

“Especially this Sherele Moody who, in a press conference here at parliament house, supported by the Greens … she came out and said that firefighters will go home and create domestic violence, be involved in it.”

Hanson added: “We don’t need this and I am sick and tired of hearing it. Your feminist, twisted views about it. I am sick and tired of this bashing men in Australia … And then, after that, Larissa Waters is backing away from her comments. well it’s not good enough Larissa, you stood beside her during that interview.”

Following the backlash over the press conference though, Moody doubled down on her comments and wrote on social media: “What happens when the fire heroes go home? Some of them bash their partners. Research shows domestic violence peaks after cataclysmic events.”

She also shared a long post on her official Facebook page in which she shared the words of one woman, who claimed that her partner’s abusive behaviour increased following the crisis.

Her comments attracted huge attention online though, with many people expressing their thoughts on social media. One person said: “So hurtful and insulting. Some people have no respect or compassion. One would hope her attitude would change if she ever needed their services.”

Another wrote: “I’m shocked at such horrible misguided and unfounded comments that have no research backing them – imagine how the fire fighters will feel reading this after all the hard work they have done and are still doing!”