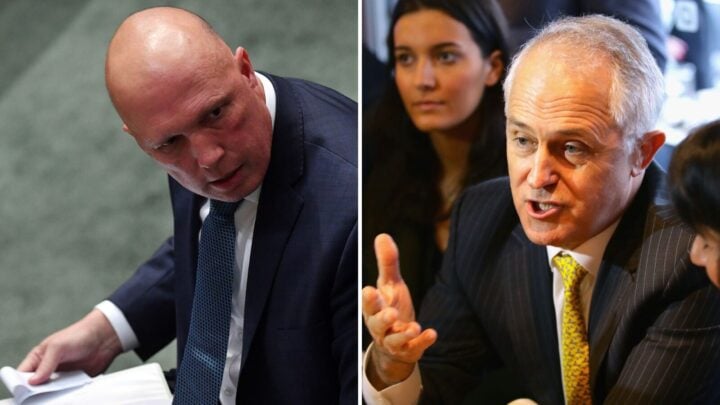 Former Prime Minister Malcolm Turnbull has slammed Peter Dutton for his part in the scrapping of a decade-long French submarine contract in favour of acquiring nuclear vessels as part of the AUKUS alliance.

Australia is reportedly scheduled to receive its own nuclear submarines by the end of 2030, according to 7 News, Dutton claimed he “had planned to buy two Virginia-class subs from the US by 2030 in order to plug a gap for the vessels”.

Speaking to ABC Radio, Turnbull held nothing back as he criticised Dutton’s claims, describing the former Defence Minister as an aggressive trouble-maker.

“It was just more blustering from Dutton … he’s a belligerent blusterer who wrecked a submarine contract,” Turnbull said.

“We’re now in a position where we don’t have any submarine program at all.

“Between Morrison and Dutton they did enormous damage to Australia’s national security.”

Malcolm Turnbull discussing the Spud this morning: Turnbull called Dutton a “belligerent blusterer” who “wrecked a submarine contract … deceived the French president [and] misled the American president”. I guess we can say the Spud has been French-Fried?

Malcolm Turnbull telling us today on RN what we already know about Morrison and Dutton.. Completely useless vandalism by both fukwits with the handling of the Submarines contracts.. Shameful stuff

As a consequence of the scrapped contract, current Prime Minister Anthony Albanese announced on Saturday, June 11 that they would compensate the French-based Naval Group a total of $830 million.

“As part of the settlement Australia will pay the Naval Group 555 million Euros which equates to around $830 million Australian. This is a fair and an equitable settlement which has been reached,” Alabanese told reporters.

“It follows as well discussions that I’ve had with President Macron and I thank him for those discussions and the cordial way in which we are re-establishing a better relationship between Australia and France.”

Former Defence Department Secretary, Dennis Richardson also weighed in on Dutton’s claims, questioning whether Australia could have received the two American nuclear submarines by the end of the decade.

“The more the Americans hear senior Australians talk about the possibility of getting them in five years’ time or in 10 years’ time, the more people in the American system scratch their heads and ask themselves whether they’re dealing with a country that seriously understands the depth of the challenge,” Richardson said.

“It’s a long shot to think that we’ll get nuclear-powered submarines from the Americans by 2030.”

Even if acquired Richardson claimed Australia did not possess the port resources required to service the nuclear vessels from America.

Richardson also addressed the $830 million compensation payment agreed to by the Albanese government.

“The $850-odd million is well spent in terms of moving on and properly compensating the French for the effort they’ve put in over the last five years,” he said.

“The speed with which we have moved to settle this matter, put a line underneath it and to move forward was very much welcomed by the French minister (for defence Sebastien Lecornu),”  Marles said.

Albanese is set to meet with French President Emmanuel Macron in Paris in an “absolutely vital” effort to reset relations between Australia and France.