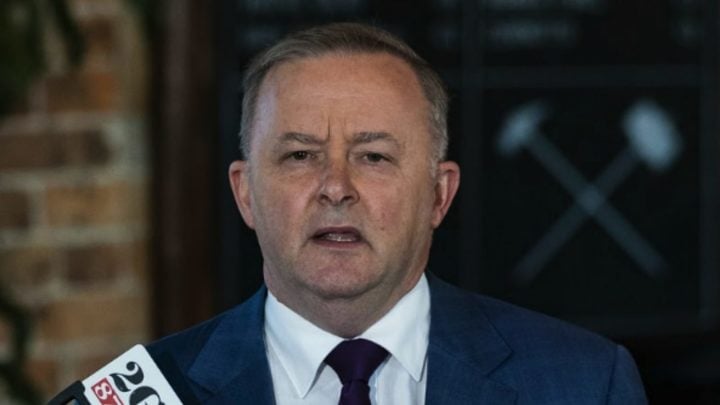 Anthony Albanese has moved to expel union boss John Setka from the Labor party over claims he made a series of “unacceptable” comments about domestic violence campaigner Rosie Batty.

The Opposition Leader slammed Setka in a press conference on Tuesday, claiming he “does not belong in our party” – before revealing he has written to ALP national secretary Noah Carroll in a bid to have him removed at the next meeting of the ALP’s administrative body.

He has also asked for Setka’s membership to be suspended until a decision is made.

Setka, the Victorian secretary of the Construction, Forestry, Mining and Energy Union (CFMMEU), has come under fire after The Age claimed at the weekend that he previously told a union meeting that Batty’s anti-domestic violence campaigning had led to men having fewer rights.

.@AlboMP on John Setka: I don’t want him in our party. It’s that simple. I have also asked the National Executive Committee to suspend his membership from @AustralianLabor from today. It stops.

“John Setka does not belong in our party, because of the views that he holds. In particular, I spoke to Rosie Batty yesterday about her concern with the views that he expressed, as she indicated she’s disappointed that this was a distraction from the honour that she received yesterday,” Albanese told reporters, according to The Australian.

“Rosie Batty is a great campaigner against family violence and the idea that she should be denigrated by someone like John Setka is completely unacceptable to me as leader of the Australian Labor Party and I don’t want him in our party. It’s that simple.”

He added: “Just a couple of years ago, of course, he made comments regarding the children of people who work for the ABCC. Those comments were unacceptable. I called them out at the time. I have consistently called out bad behaviour, whether it be from trade unionists or employers.

“My concern here is that John Setka undermines the credibility of the trade union movement through the position that he holds and the public views that he’s expressed.”

His comments came after Labor frontbencher Penny Wong urged Setka to consider his position in the party.

“I want to say to Rosie Batty, I’m on your side,” Wong reportedly told ABC Radio.

“I thought his comments about Ms Batty were completely inappropriate. They are not in step with the values of the broader labour movement or the Labor party.”

Batty took up her fight against domestic violence after her abusive husband killed her son Luke in a public park in 2014.

She has since branded the alleged comments from Setka “ludicrous” in an interview with the ABC.

“Clearly it’s ludicrous and I think it’s an example of somebody whose leadership role really needs to be challenged, because it’s not a reflection that’s appropriate,” she told the news outlet.

Setka told The Age his comments were taken out of context at the time.

What do you think? Should Setka be expelled from Labor?