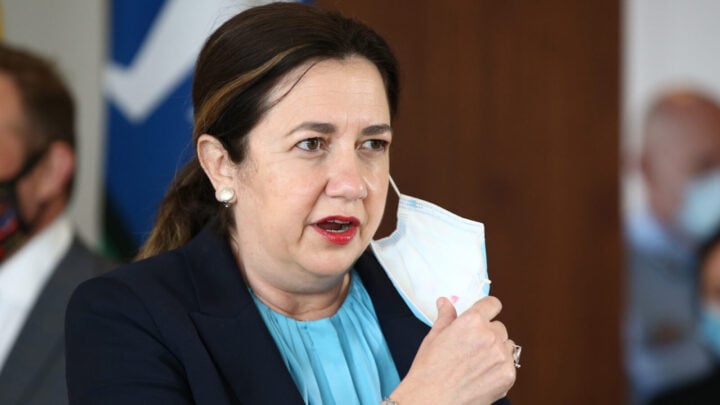 The plane, which departed from Covid-riddled Sydney, touched down in Brisbane on Monday afternoon. The families went straight into hotel quarantine, despite there being a two-week ban in place to ease the pressure on the system.

Fellow Queenslanders and pollies have since ripped into the premier over her “double-standard” approach.

Senator Matt Canavan said her claims of a shortage in hotel quarantine vacancies “was just a media stunt”. “I think the Queensland government has won the double-standard award for the double-standard Logie for this coronavirus outbreak, this is not their first rodeo,” he told Sky News host Peter Stefanovic on Tuesday.

“I do not begrudge NRL players being reunited with their family members. It must be very tough for them spending months away in a high-pressure environment that professional sport is.

Meanwhile, former Queensland Opposition leader John-Paul Langbroek, who has been in Victoria for his father’s funeral and is not allowed back into Queensland until September 9, said: “It’s very hard to cop for my constituents who have been affected (as I have) by being excluded from their own State, their homes, and loved ones.

“The Premier’s double standards are having real impacts on real people during the most difficult times in their lives, and from what I’ve seen I’m not sure the Premier understands that.”

Queenslanders have also weighed in on the situation, with one Facebook user writing: “Absolutely disgusting. People could not get in for their dying parents, babies so forth and she allows NRL families just like that.” Another commented: “Sport above everything.” While a third said: “If you haven’t noticed before she loves the footy.”

Palaszczuk has since defended the decision to allow NRL players’ family members and officials into Queensland, telling reporters on Monday: “I didn’t grant the exemptions, the chief health officer granted the exemptions.”

She also defended a decision to allow Australian and Indian women’s cricketers into hotel quarantine ahead of their series. “It’s outside the cap so it’s not to do with the cap which is used for domestic (quarantine),” Palaszczuk said, 7News reports.

Prime Minister Scott Morrison also weighed in on the controversial decision in a 4BC radio interview on Tuesday morning, saying he believed home quarantine was the answer to booked-out hotels.

“I share people’s frustration about that (exemptions for sports stars) no doubt about that,” he said, 7News reports. “But, what’s the answer, I’ll tell you what the answer is: we need to move to home quarantine. Home quarantine means there’d be (quarantine) places for all Australians, for all Queenslanders.”

In the same interview, he also said Australians would be allowed to go overseas with home quarantine orders on return once we hit the vaccination target (80 per cent).

What are your thoughts on this story? Do you agree with the premier?