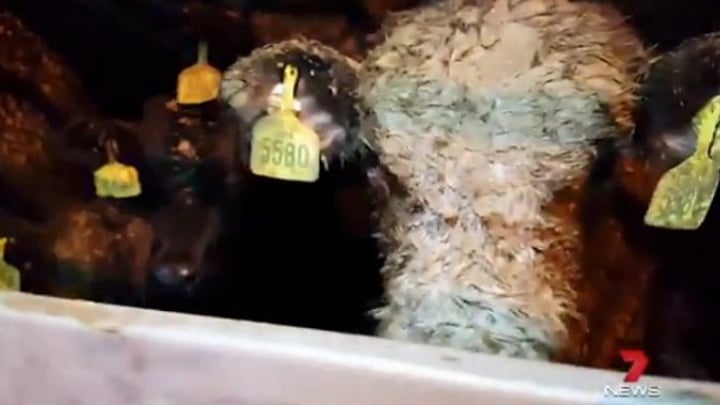 There have been major calls in parliament for Australia to ban all live exports after hundreds of sheep were filmed collapsing in staggering heat and terrible conditions on a cargo ship recently.

And now another distressing video has emerged of cattle frothing at the mouth and covered in filth after being transported from Australia to Israel this month.

The video, shared by 7 News, shows dozens of cattle packed together as they’re unloaded from exports ship Bader III, after travelling from Adelaide and Fremantle.

The Israel Against Live Shipments (IALS) spokeswoman Anat Refua told The Advertiser that investigators were “appalled” at the conditions, as many were seen with froth-covered mouths in up to 44C heat.

*Warning – Distressing Content* Footage has emerged of Australian cattle arriving in Israel on board the Bader III – a live export vessel that left Adelaide in early May. #LiveExport #7News pic.twitter.com/LRjYZtq3B2

“The stench was unbearable and the cattle were covered in faeces from head to toe,” Refua said. “It is despicable for both Israeli and Australian governments to allow such a trade to operate despite all the evidence of animal suffering.”

It sparked an angry response from social media users. One person branded it “awful” while another said on Twitter: “Did anyone expect anything different? As long as this vile trade continues, these animals will continue to suffer. The only way to resolve this is to end it NOW.”

The footage, which was reportedly released by IALS, comes just weeks after the Liberal Party’s Sussan Ley introduced a private member’s bill in parliament, calling for a ban on all live sheep exports to the Middle East in the northern hemisphere’s summer months in 2019, before banning them completely in five years.

It gained wide support from many of her fellow politicians, however Agriculture Minister David Littleproud previously revealed the government would not be imposing a ban in the summer months, but would instead introduce new rules to improve comfort for animals.

The debate stemmed from shocking footage, which aired on Channel 9’s 60 Minutes, showing sheep packed onboard a carrier for three weeks, and dying from heat stress and “terrible” living conditions.

A heat wave on one voyage last August resulted in unbearable conditions. Ship records show that on the second day, 880 sheep die. That’s one death every two minutes. On the third day another 517 succumb. The heatwave continued for five days. #60Mins. pic.twitter.com/vsWw3r5bvF

Video footage showed the sheep stacked up to 10 storeys high and forced to stay standing for three weeks, with many not surviving the journey. Once in the Middle East, the heat onboard was staggering – and one voyage recorded 880 sheep dying in just one day from heat stress.

As well as breaking Australian export regulations and animal cruelty laws, the videos have thrown into question the entire industry’s protocols.

A spokesman for Agriculture Minister David Littleproud confirmed to Starts at 60 that the Bader 3 will be phased out by his upcoming reforms.

Meanwhile Littleproud said in a statement: “Evidence provided to the department for this 22-day voyage was positive in regards to the animals’ health and welfare. There was an independent observer on board the voyage – an experienced qualified veterinarian who provided the department with daily updates.

“The Israeli veterinarians were reported to be very happy with condition of livestock on arrival and the overall mortality rate for cattle was 0.28 per cent, (15 of 5799 cattle). The footage does not reflect the conditions of the cattle throughout the journey. They were washed down every second day, but this cannot occur once the ship is in port and unloading took place over two days.”

Do you think there should be a permanent ban on all live exports?