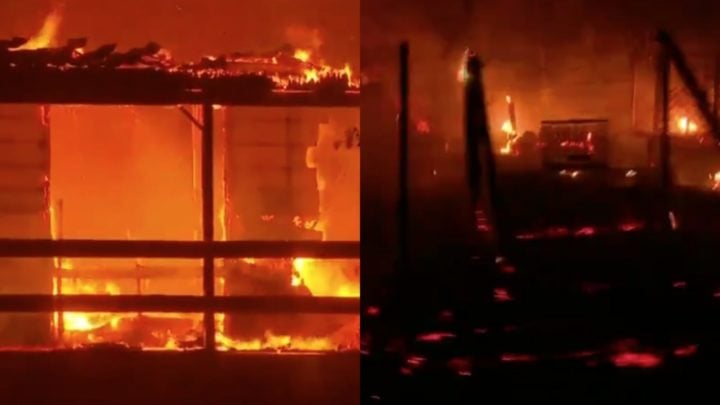 There are six fires currently listed at emergency levels in the state, while another 10 are at watch and act level. Source: Twitter - 7News Sydney

A bushfire warning remains in place for parts of the country as dedicated emergency service workers continue to battle against blazes burning across Northern New South Wales and South East Queensland.

On Saturday morning NSW Premier Gladys Berejiklian confirmed that two people are dead and seven others are still missing. More than 30 people have been injured and at least 100 homes have also been destroyed in the horrific blazes.

Firefighters have located the remains of a person in a vehicle at the Kangawalla fire, near Glen Innes. Two people remain unaccounted for after yesterday's bush fires. NSW RFS is working with @nswpolice. #nswrfs #nswfires

Rural Fire Service Commissioner Shane Fitzsimmons told the ABC this morning that the body was found in the car by one of their volunteers who was trying to identify unaccounted-for people.

“One of our senior volunteer commanders has come across a burnt-out vehicle and the remains of somebody has been located inside that vehicle,” he said.

“Clearly, that’s very distressing and our thoughts and prayers to those that are affected and particularly the family and loved ones of the occupant of this vehicle.”

At 6.30am this morning, 77 fires continued to burn across the state, with 42 of those identified by the NSW RFS as “uncontained”.

“We are still seeing erratic and dangerous fire behaviour across the remainder of fire grounds, which continues to pose a threat to homes,” the RFS said this morning.

At this stage, it appears at least 100 homes have been destroyed in yesterday's bush fires. Three people are unaccounted for. More than 30 people have been injured. At 6:30am there are 77 bush or grass fires with 42 uncontained. #nswrfs #nswfires pic.twitter.com/WtB9O671bU

According to NSW RFS Deputy Commissioner Rob Rogers, there are six fires currently listed at emergency levels in the state, while another 10 are at watch and act level.

“It’s not over,” Rogers said on Sky News on Saturday morning. “There are six emergency level fires and 10 watch and acts. They go from Glen Innes into Walcha down to Port Macquarie and to Taree into Old Bar.”

He continued: “There were a number of people who called for emergency services’ help and we could not get trucks or aircraft to those properties. We’re trying to access now. If people haven’t got hold of someone, please make sure police are aware of that.”

This shows the dangerous conditions that have confronted firefighters and residents today. This is the crew from Warringah HQ at the Hillville fire near Taree. #nswrfs #nswfires pic.twitter.com/lIhnF8P1Qf

Many NSW residents have since taken to social media to share updates, with one writing: “Current situation tonight before we fled to the local Club to seek safety in Old Bar. Currently waiting for the fire to hit us.”

Current situation tonight before we fled to the local Club to seek safety in Old Bar. Currently waiting for the fire to hit us #NSWfires #oldbar #nsw #bushfires pic.twitter.com/jlHOvt48R8

Meanwhile, Starts at 60 reader Margaret Whitley spoke of her experience, writing: “I will never forget the sound of that fire; the loud roar as it “devoured” all the trees. So very close to our village and last evening was very stressful with flames so high and only a couple of kms away that it was frightening to see!! The Seashells resort to the north of here. had a very close shave apparently! Thank goodness for that wind change. One home in Rainbow Flat destroyed so I hope no more! A couple of days I will NEVER forget.”

It has only been a few months since fire ravaged the country so viciously with the last terrible bushfire occurring back in September throughout Queensland. At the time firefighters were focusing on bushfires burning around the towns of Applethorpe and Stanthorpe in Queensland, as well as the Binna Burra region on the Gold Coast Hinterland.

Have you been following this story? Have you or any of your loved ones been affected by the bushfires?