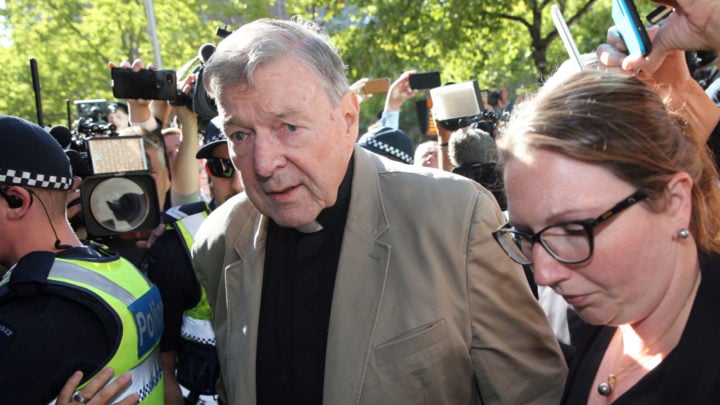 George Pell will remain behind bars after his appeal was dismissed in court on Wednesday morning. Source: Getty

Cardinal George Pell will remain behind bars for the sexual assault of two choir boys following an unsuccessful appeal in the Supreme Court of Victoria on Wednesday morning.

The 78-year-old will continue to serve his sentence of six years imprisonment and will be eligible for parole after three years and eight months. According to the Catholic News Agency Pell was joined at the court hearing by his brother David and friend and former Sydney Comms Manager Katrina Lee and chancellor of the Sydney archdiocese Chris Meany.

Prior to today’s court appearance, the 78-year-old spent almost six months in prison after being found guilty of five counts of child sexual abuse late last year. The cardinal was convicted of the charges on December 11, 2018 at Melbourne’s county court, following a unanimous verdict from the jury. He was found guilty of sexually penetrating a child under the age of 16, which the victim’s lawyer reportedly likened to “oral rape”, and four charges of an indecent act with a child under the age of 16.

Pell’s victims were two 13-year-old choirboys, who were abused by the then Archbishop of Melbourne in December 1996 and February 1997 in the city’s St Patrick’s Cathedral. According to multiple reports Pell’s legal team argued an appeal claiming the verdicts were unreasonable and that insufficient evidence was provided in relation to the crimes in the late 1990s. They produced a list of 13 reasons why Pell could not have carried out the abuse such as his supposed location in the cathedral at the time of the incidents.

This was despite the graphic details of the assaults that were heard in court. In the first instance, Pell reportedly confronted the two boys in the priests’ sacristy of St Patrick’s Cathedral, undoing his pants and forcing the head of one of the boys close to his genitals. He then moved to the second boy and put his penis in the boy’s mouth.

The outcome of Pell’s appeal comes just weeks after it was revealed that prison authorities were investigating whether Pell had committed a further offence after a letter emerged on social media, allegedly penned by the incarcerated senior Catholic from inside the Melbourne Assessment Prison and shared by the ‘Cardinal George Pell Supporters’ account. The letter, signed “Your grateful brother”, was shared on Twitter earlier this month and has since attracted comments from both those who support Pell and those who believe he was rightfully convicted.

“My faith in our Lord, like yours, is a source of strength,” the letter reads. “The knowledge that my small suffering can be used for good purposes through being joined to Jesus’ suffering gives me purpose and direction. Challenges and problems in Church life should be confronted in a similar spirit of faith.”

While it is not an offence for prisoners to send or receive mail, the Department of Justice and Community Safety confirmed at the time they were investigating whether Pell did indeed write the letter and commission someone else to share it on his behalf. A department spokesperson said: “Prisoners are denied any access to the internet or social media. It is a prison offence to commission other individuals to post something on social media on behalf of a prisoner. The Department of Justice and Community Safety will thoroughly investigate this social media activity. Any prisoner found to be contravening prison regulations faces disciplinary action.”