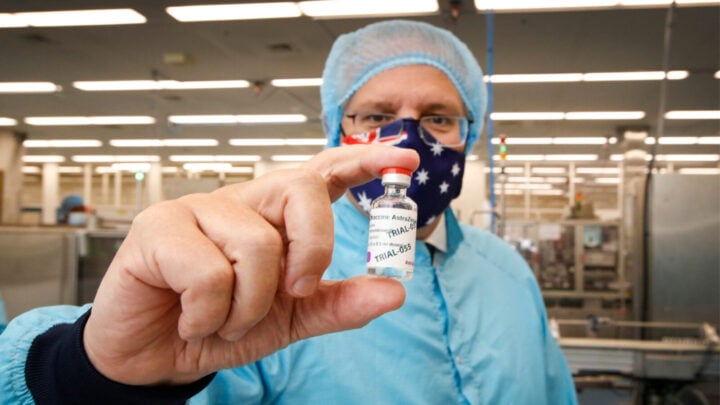 Prime Minister Scott Morrison says he expects to receive advice from health authorities on Australia's continued use of the vaccine on Thursday evening. Source: Getty.

Following new findings from Europe, Prime Minister Scott Morrison has addressed concerns over the link between the AstraZeneca Covid-19 vaccine and blood clots – saying we need to weigh up the “very positive benefits” of the vaccine and keep the risk “in perspective”.

On Thursday, the European Medicines Agency (EMA) found a possible link between AstraZeneca’s COVID-19 vaccine and rare blood clotting issues in adults but concluded the risk of dying from Covid-19 is far greater than dying from complications caused by the vaccine.

In the wake of the EMA’s findings, the United Kingdom’s vaccine advisory board said all people under 30 will now be offered alternative vaccines such as Pfizer and Moderna. The Joint Committee on Vaccines and Immunisation said there had been 79 reported cases of blood clots in the UK, out of more than 20 million doses of the AstraZeneca vaccine administered, 19 have died.

The Australian Technical Advisory Group on Immunisation (ATAGI) and the Therapeutic Goods Administration (TGA) are meeting today to consider the latest vaccination findings out of Europe and the UK.

Morrison addressed the media on Thursday morning saying he was intent on not pre-empting or speculating and would be awaiting the advice of ATAGI and TGA before making any decisions about use of the vaccine in Australia.

Morrison said the community needed to weigh up the “very positive benefits” of the vaccine and keep the potential risks “in perspective”.

“I think we need to maintain a perspective on these issues,” he said. “So we need to consider the positive benefits of them. But what we’re looking at here is an incidence of these clotting behaviour of some one-to-five in every million – to put that in perspective the contraceptive pill is 7 to 10 per 10 thousand.”

“We have the best people in the world looking at these issues to give us the best possible advice and we will be taking that today. At this point, there is no advice to suggest there is any change to the rollout of the vaccine. “

Australia’s Chief Medical Officer Paul Kelly acknowledged that the findings could affect confidence in the vaccine but stressed that the clots were “extremely rare”.

“We certainly place safety above all else, and as we’ve done throughout the pandemic, the government will be guided by that health advice,” he said. “Like with any treatment, vaccine, medicine we have to look at the risk and benefit and we do know that the risk of vaccination against this very serious disease of COVID is a really important component of our control.

“The AstraZeneca vaccine is extremely effective and very safe for most people.”

Kelly did say the government was looking at other available vaccine options but said the market was tight internationally, which was why Australia is relying so heavily on locally made vaccines like AstraZeneca.

Several European nations including France, Italy and Germany, Ireland, Netherlands, Denmark, Norway, Iceland and Bulgaria, have already suspended use of the vaccine over its link to blood clots. Denmark was one of the first countries to suspend the vaccine in early March, after the death of a 60-year-old woman, with Nationals Senator Matt Canavan calling for Australia to follow Demark’s lead.

On March 29, Canada suspended the use of the AstraZeneca vaccine for people under 55. The pause came following a recommendation by the country’s National Advisory Committee on Immunization (NACI) with Dr Shelley Deeks, vice-chair of NACI saying that given the risks there was “substantial uncertainty” about the benefit of providing the vaccine to those under 55.

Despite the uncertainty, the family of UK man Neil Astles, 59, who died of a blood clot after getting the AstraZeneca vaccine earlier this month, has urged the public to “keep saving lives” by continuing to take the jab. The man’s sister told The Telegraph that the family was “furious” but wanted the public to continue taking the AstraZeneca vaccine because “fewer people will die”.

Will you be getting the AstraZeneca jab?