Elderly man, 91, ‘threatened and robbed by armed gang of children’ 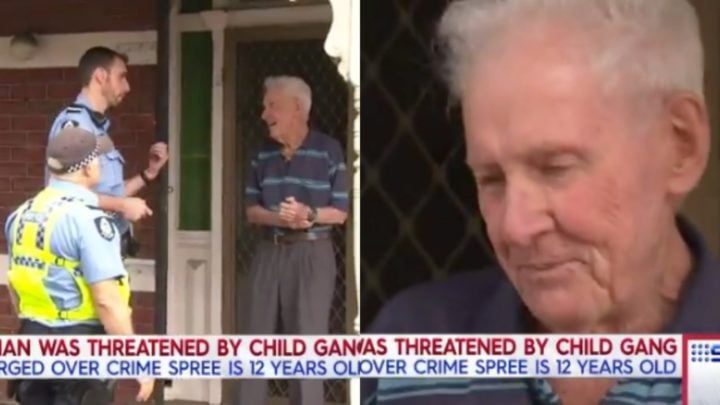 A 91-year-old was allegedly targeted in a robbery by a group of children. Source: Twitter/ Nine News Perth

An elderly man was allegedly threatened and robbed by a group of children earlier this month, after they broke into his home armed with weapons.

According to the news outlet the man was sleeping in bed when the gang broke into his Perth home and threatened him with golf clubs. It is believed that they broke in through the back door using an axe before confronting him and ransacking his house.

A 91-year-old Perth man has been threatened and robbed by a gang of children armed with a golf club.

Police say the home was one of three targeted, with the youngest charged just 12-years-old.#9News | https://t.co/rND3QXfZGj pic.twitter.com/eDtKZUUFQt

Speaking to Nine News about the shocking incident, the 91-year-old said he handed over $400 in cash, which was all he had on him at the time.

“It was frightening,” he said in a TV interview . “They wanted more money, but (I) had nothing left to give.”

Nine News reports detectives have managed to track down two of the alleged robbers including a 15-year-old and a 12-year-old after discovering a footprint in the backyard matching one of the boys’ sneakers. They were charged with aggravated home burglary over the alleged incident.

The pair are also accused of a home invasion at another property and an attempted burglary at a third on the same night.

Read more: Elderly woman claims 23-year-old ‘picked her up like a doll’ in horror ‘attack’

Sadly this isn’t the first time an elderly member of the community has been targeted. Just weeks ago an elderly woman spoke out claiming she was “picked up and tossed to the ground” in an alleged attack by a younger woman, just days after shocking footage emerged

Judith Green, 75, spoke to Nine News about the alleged assault, revealing she was waiting for a bus at the Market Square Shopping Centre in Geelong, Victoria, when she became frustrated about something unrelated so began banging her walker against a rubbish bin.

“This girl objected to it, she didn’t like me trashing the bin,” Green claimed at the time. “The next thing I knew I was on the ground … she was like Hercules.”

Green claimed she suffered a bruised face and hand from the alleged attack and added: “She picked me up like a doll and tossed me to the ground.”