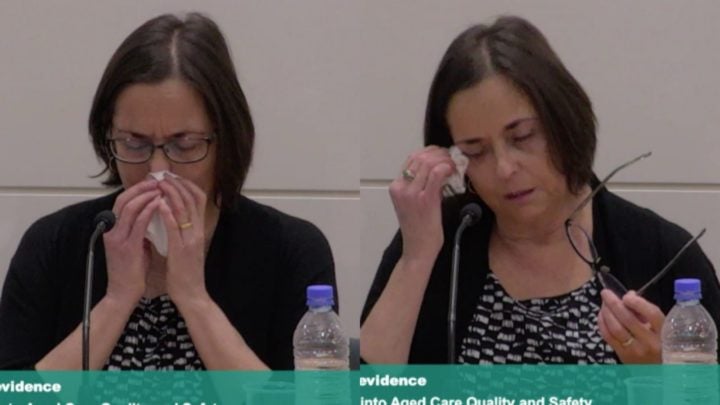 Anamaria Ng struggled to contain her emotions as she detailed her late mother's condition in an aged care home to the Royal Commission.

The daughter of an elderly woman, who was found with maggots in an infected wound while in the care of a nursing home, broke down in tears on Wednesday as she shared details of her mother’s shocking suffering prior to her death.

Annunziata Santoro died in October of last year at the age of 94, after spending time in the care of Assisi Centre in Victoria. Her death tragically came after eight maggots were discovered in a serious pressure wound on the grandmother’s heel.

Appearing at the Aged Care Royal Commission hearing in Darwin this week, her emotional daughter Anamaria Ng gave evidence of her late mother’s condition and claimed that nurse unit manager Jamuna Jacob refused to take responsibility and essentially tried to stop GP Eric Tay from telling her about the maggots. This was also confirmed by Tay on Wednesday.

Annunziata sadly died just days after the maggots were discovered, with Tay claiming the infection in her heel was likely a contributing factor to her death.

“The first question my brother asked was how could that have happened? the emotional daughter told the hearing. “And Dr Tay went on to explain that, obviously, a fly had entered the wound and laid eggs. Ms Jacob said she doesn’t know how the wound would have been exposed such that a fly could get in.

“She said the only time it would ever be exposed would be when my mother was being showered.”

She added: “And then she went on to say, basically – I’m not saying that it was a good thing, but basically saying that maggots are used in modern medicine. She has used them herself and was essentially trying to downplay the significance of the whole thing.”

It was heard that the grandmother was not provided with any painkillers during this time and that both Anamaria and Tay were told by staff at the centre that Annunziata’s agitation was due to a behavioural problem.

This led to Tay prescribing the grandmother anti-psychotic medicine she did not need.

Despite her worsening condition, the court heard Annunziata was also allowed to persist with weight bearing exercises with a physiotherapist employed by the centre, even though this would have contributed to the severity of the wound.

After this it was recorded by staff that the wound had deteriorated to such an extent that they were “able to see and feel bone” with an x-ray showing “likely osteomyelitis or bone infection”.

“Even when the presence of the maggots was disclosed to the family by Dr Tay, the nurse manager sought to make light of it and to shift responsibility for it onto others including the family themselves,” Senior Counsel Assisting Peter Rozen claimed in the hearing.

“Only two weeks after Ms Ng had been belatedly told about the seriousness of her mother’s heel wound, Ms Santoro passed away. Her death certificate lists seven causes of death including osteomyelitis.”

Speaking about the tragic situation her mother had been in Anamaria said she was “appalled” by Jacob’s behaviour and lack of care for Annunziata.

“I was appalled that she was essentially not prepared to take responsibility for what happened,” she told the Royal Commission.