“We’re not going to take that Oscar from him”: Whoopi Goldberg weighs in on Will Smith Oscar slap 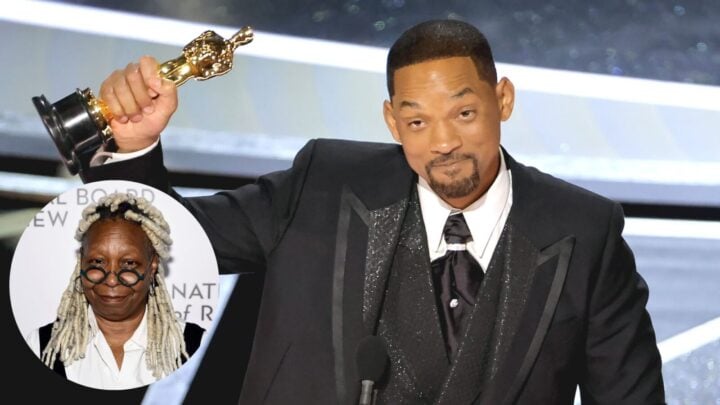 Will Smith is likely going to keep his Oscar statuette. Source: Getty

While Hollywood deals with the aftermath of Will Smith slapping presenter Chris Rock on the 2022 Oscars stage, former Oscars host Whoopi Goldberg has weighed in, voicing her thoughts on Smith’s post Oscars fate.

Goldberg, who serves as the governor of The Academy’s Actors brand, explained on The View on Monday, March 28, that although it is likely Smith will have to face the consequences of his actions, losing his coveted award won’t be one of them.

“We’re not going to take that Oscar from him,” said Goldberg. “There will be consequences I’m sure, but I don’t think that’s what they’re going to do, particularly because Chris said ‘Listen, I’m not pressing any charges.’”

Earlier in the show, Goldberg claimed “a lot of stuff probably built up” while trying to pinpoint the cause of Smith’s outburst. Goldberg also referenced a number of jokes that have been made at the couple’s expense in the past.

“I think he had one of those moments where it was just like, ‘Just stop.’ I get it, not everybody acts the way we would like them to under pressure. Some people just snap. He snapped,” she said.

“Sometimes you get to a point when you behave badly,” she continued. “I myself have behaved badly on occasion.”

Smith slapped Rock mid-performance after he made a comment about Smith’s wife, Jada Pinkett Smith, starring in the next G.I Jane movie – a role that stars a bald, female lead. Pinkett Smith suffers from alopecia, a hair-loss condition.

During his acceptance speech for winning Best Actor for his role as Venus and Serena Willaims’ father Richard Willing in King Richard,  Smith addressed the incident directly in a tearful apology.

“Richard Williams was a fierce defender of his family,” an emotional Smith said in his acceptance speech.

Smith went on to apologise to the audience but distinctly left out apologising to Rock.

Smith later took to social media on March 28 to post a public apology to Rock and to the Academy for his violent actions and abuse at the Oscars, condemning all forms of violence and his own actions as “unacceptable and inexcusable”.

Despite the apology, a “formal review” was announced into Smith’s actions as the Academy denounced the star’s behaviour.

“We have officially started a formal review around the incident and will explore further action and consequences in accordance with our Bylaws, Standards of Conduct and California law,” the Academy’s statement read.

The Academy does not condone violence of any form.

Tonight we are delighted to celebrate our 94th Academy Awards winners, who deserve this moment of recognition from their peers and movie lovers around the world.

Do you think Will Smiths Oscar should be taken away from him?