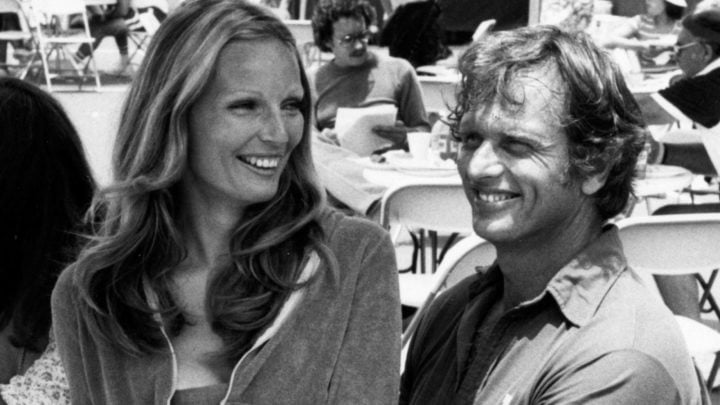 Valerie Lundeen Ely (pictured here with husband Ron Ely in 1977) was found dead at her home in Santa Barbara on Tuesday. Source: Getty.

The wife of Ron Ely, who shot to fame in 1960s TV series Tarzan, was tragically stabbed to death in her Santa Barbara home earlier this week by her son, who was also shot and killed by police officers who attended the scene.

Now, a US media outlet has released the audio of the emergency dispatch call for the incident which was made after Cameron Ely called 911 and raise the alarm, revealing that the 30-year-old tried to blame his mother’s death on the elderly actor, who was at home at the time of the killing, but reported to be unharmed.

American news outlet The Blast released the recording online following the death of Valerie Lundeen Ely on October 15, which was confirmed by local police in a statement on Wednesday.

The call begins with a dispatch worker saying: “He said that his father tried to attack mother … and then hung up.” The call handler then says the caller was “out of breath, unintelligible and crying” and that they were trying to get further information.

Later in the call, an emergency services worker can be heard telling dispatch: “From what I’m getting from the elderly gentlemen, outstanding is his son who has since driven away.

“He can’t verbalise what he drives, but nodded that there’s no one else in the house and that it was his son who has since left.”

Officers were called to the address in the affluent suburb of Hope Ranch in Santa Barbara at around 8.15pm on Tuesday. Upon arriving at the scene they discovered the body of 62-year-old Valerie, who had passed away as a result of multiple stab wounds.

While on scene, officers identified the suspect to be Cameron and began an extensive search to track him down. They located the suspect outside of the property and deemed him to be a threat before fatally shooting him.

“Deputies searched the residence and surrounding area for Cameron Ely,” the Santa Barbara County Sheriff’s Office said in a statement. “During the search, the suspect was located outside the home. “He posed a threat and in response four deputies fired their service weapons at the suspect, fatally wounding him. No deputies were injured during the confrontation with the suspect.”

A spokesperson added: “The Santa Barbara County Sheriff’s Office is conducting criminal, coroner’s, and administrative investigations of this incident. Autopsies of both the victim and the suspect are pending.”

Ely shot to fame in the 1960s as the star of 1966 television series Tarzan, which ran until 1968. He also starred in 1975 science fiction flick Doc Savage: The Man of Bronze in which he played the leading role.

The 81-year-old veteran actor, who also had roles in Fantasy Island and the Wonder Woman TV series, married former Miss Florida Valerie, who was his second wife, in 1984 and the couple went on to have three children together, daughters Kirsten and Kaitland, and son Cameron.

Have you been following this story? Did you watch the Tarzan TV series?