‘I see him everywhere’: Red Symons opens up on heartbreak of losing son 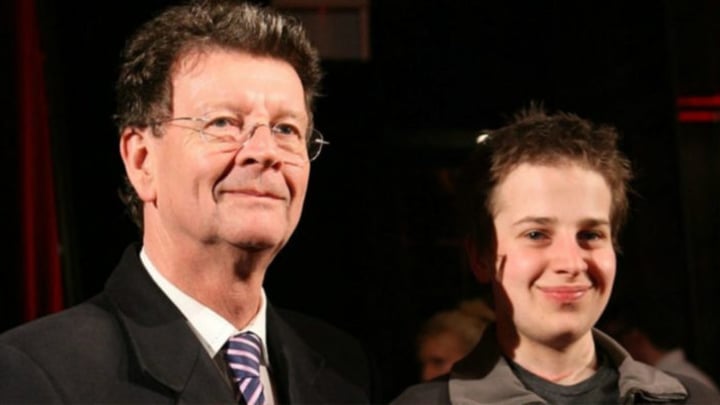 Red Symons has opened up about the pain he still feels at the loss of his son. Source: Getty

It’s been over a year since Red Symons laid his beloved son to rest, but the TV and radio presenter said not a day goes by that he doesn’t think of him.

In October 2018, Samuel passed away after a lifelong battle with cancer, aged 27. He was just four years old when he was first diagnosed with a brain tumour and would battle with recurring tumours and thyroid cancer throughout his life.

When his aggressive brain tumour returned in 2017, he underwent further treatment, but to no avail. Now over a year since the tragic day of his death, Red has opened up about the constant heartbreak he experiences in a chat with the Herald Sun.

“I just found myself in my everyday life seeing him everywhere; I drove up past the Peter MacCallum (Cancer Institute) where he died, I came here (to Marios in Fitzroy) which was the first place we took him to when we emerged from hospital after he was born and welcomed him to the outside world,” he told the publication.

“It is a truth, I shall always have him. I can look at children now and miss him when he was four years old or two years old or six years old, rather than simply being annoyed by someone else’s child.”

It’s been almost a year since Red spoke out about his son’s final moments and his struggle to cope with the loss. In a candid interview for The Sydney Morning Herald’s publication Good Weekend in May last year, Symons, admitted he cried everyday.

“In the end, with his recent … let’s say the word, death … what I clung to was just the idea of telling him that I loved him,” Symons said. “That’s fundamentally what was there. He went out with grace and dignity. He was in a good place with good people and I don’t believe he went out with discomfort or fear.”

Symons also recalled the moment a doctor phoned him to tell him that Samuel’s cancer had returned and that the prognosis wasn’t good.

“A professor of surgery called me – and they’re good those guys, they know exactly how much to communicate, they don’t overdo it, they don’t underdo it. He’d seen the biopsy. He just said, ‘It’s bad.’ And that’s all he needed to say,” Symons recalled.

Not long after Samuel passed away, Red also sat down with 3AW host Neil Mitchell to discuss the impact Samuel’s death had had on the family. He described his son as “remarkable in his own way” and that despite being told that Samuel wouldn’t make it past high school, he remained on earth for almost three decades.

“Twenty years later, he’s got a master’s degree,” Red said. “He’s the most qualified person in the family.”

The family had previously appeared on ABC’s Australian Story in February, 2010, where Samuel spoke openly about living with the deadly disease.

“Even at this stage in Year 12 I still have thyroid cancer and I still have a brain tumour in my head which is a little bit off-putting,” a the then-18-year-old Samuel said.  “I used to think what it would have been like if I didn’t have cancer but what’s the point of thinking about the past when you can just think of now?”

Have you ever lossed a loved one to cancer? How did you cope with the loss?