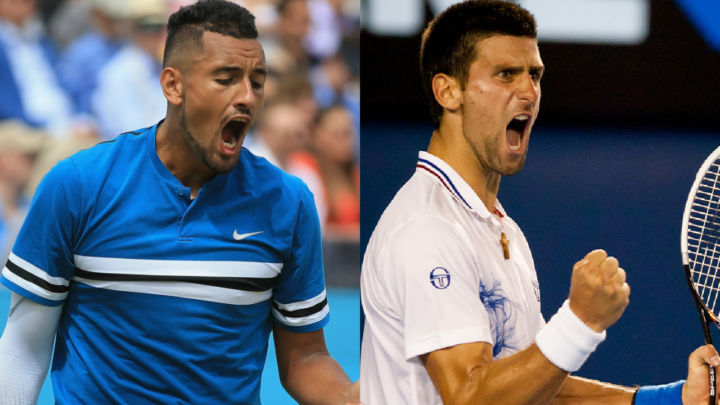 Australia’s resident ‘bad boy’ tennis star Nick Kyrgios is not one to shy away from a quarrel, and the 25-year-old was up to his old tricks again on Monday, after he labelled Novak Djokovic a “very strange cat”.

Kyrgios’ comments come after the world number one said he didn’t have respect for the Australian off the court. “My respect goes to him for the tennis he’s playing,” Djokovic said on Sunday, the Herald Sun reports.

“I think he’s a very talented guy, he’s got a big game and he’s proven that he has a quality to beat any player in the world. Off the court, I don’t have much respect for him, to be honest. That’s where I’ll close it.”

However, speaking to the press after his win at the Australian Open on Monday night, the Aussie tennis star made it clear he wasn’t taking criticism from anyone, especially “someone that’s partying with his shirt off during a global pandemic”. Kyrgios was making reference to the tennis tournament Djokovic organised in Serbia at the height of the pandemic last year, which saw the tennis star dancing topless at a party following a win.

“I don’t know if I can take any slack from that man,” Kyrgios said in response to Djokovic’s latest comments. “Like, that’s as bad as it gets for me.”

Kyrgios went on to say the Serbian’s comments surprised him because, if anything, Djokovic should respect him off the court, rather than on it.

“It’s a strange one for me,” he said. “It actually would make complete sense to me if he was like, ‘Look, I don’t respect the guy on the court’, because I understand if he doesn’t agree with some of my antics on the court that I have done in the past. But I’m not quite sure how he can’t respect me off the court.”

Kyrgios then went out to point out he’s “gone about things extremely well, especially during the pandemic”. “I was driving around delivering food to people during the pandemic that couldn’t get the supplies,” he said. “I was extremely careful about what I was doing — I didn’t want to spread the virus to anyone.”

It comes just a few weeks after Kyrgios branded Djokovic a “tool” for his list of quarantine requests. “Djokovic is a tool,” the 25-year-old said in a tweet at the time. “I don’t mind Bernie but his Mrs obviously has no perspective, ridiculous scenes.”

The tweet was relating to drama in the lead up to the Australian Open, in which at least 72 players who were on board planes that unknowingly carried confirmed cases of Covid-19 were forced to self-isolate for 14 days without access to their coaches or the ability to properly train.

Djokovic wasn’t having a bar of it and took a stand on behalf of these players by writing a list of six demands that was sent to Tennis Australia. The demands, which included moving the players out of hotels into private houses with tennis courts, was met with a firm “no” from Victorian Premier and quarantine boss Daniel Andrews.