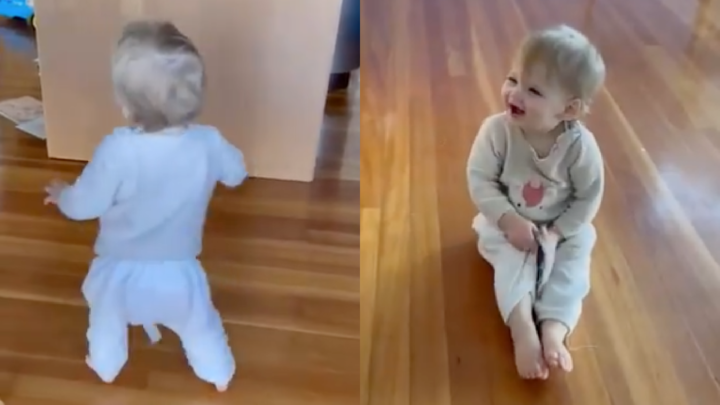 Watching your child or grandchild take their first steps is an exciting and memorable experience, and Today show host Karl Stefanovic and wife Jasmine Yarbrough have captured the special moment on camera.

Speaking on the morning show on Tuesday, the 46-year-old revealed his daughter Harper has finally begun walking, and just before her first birthday too!

In a video aired on Today, which was later shared on the program’s Twitter page, Karl and Jasmine can both be heard cheering the little one on as she takes her first few steps. Harper looks pretty pleased with herself as she flashes a cheeky smile to the camera.

While proud dad Karl was clearly over the moon about Harper’s new abilities, he told his co-hosts that he was also a little bit nervous. We’re sure most parents and grandparents can relate to the worry that comes with curious little tots. Once they start walking and pulling themselves up on furniture, it can all get a bit full-on!

“Whilst it is exciting, it’s also incredibly daunting,” he revealed. “Look at the gate in the back – have to start locking everything up.”

Karl also joked Harper was growing up too fast, claiming, “She is practically at the clubs.”

Harper, who turns one next month, is the first child for the pair, who married in December 2018 in an intimate ceremony in San José del Cabo in Mexico. Karl also has three other children, Jackson, River and Ava, from his first marriage to journalist Cassandra Thorburn.

The first steps come just a few weeks after Harper gained a new baby cousin, as Karl’s brother Peter and his wife Sylvia Jeffreys welcomed their second child, a beautiful baby boy. At the time, Sylvia took to Instagram to share the happy news, revealing the pair had named him Henry. Sylvia and Peter are already parents to one-year-old Oscar.

“Our gorgeous, healthy little boy makes us a family of four,” the Today Extra host wrote, alongside two sweet pics of their new bubba. “His proud parents couldn’t be happier. His big brother is learning to be gentle. Big love all around.”

And just last week aunty Jasmine shared an adorable baby update on her nephew. The shoe designer posted a photo of the newborn in his pram as his older brother Oscar and cousin Harper Stefanovic stood beside him. Baby Henry was wrapped in a beautiful patterned blanket, while Oscar wore a cool tie-dye yellow outfit, and Harper wore a long-sleeved pink top and trendy nude-coloured bottoms.

Did you capture your child or grandchild's first steps?