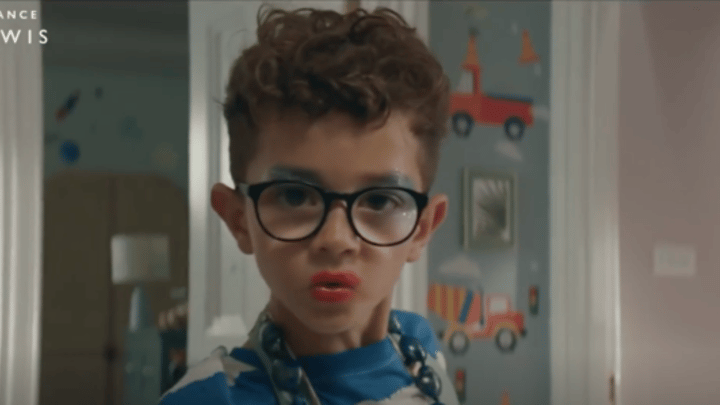 Retail giant John Lewis has taken down their controversial ad for home insurance after it was ruled “potentially misleading”.

The commercial shows Reggie strutting around his home to the song “Edge of Seventeen” by Stevie Nicks, smearing paint on walls, dusting glitter on the carpet and breaking many household items in his destructive wake.

The progressive campaign came under fire and was withdrawn after more than 400 complaints were made to the company.

Twitter users complained that it was an example of toxic masculinity and male entitlement. Others raised gender politics, accusing the retailers of sexualising the child actor.

“Why are you doubling down? The advert was appallingly sexist, and reinforced all sorts of regressive stereotypes about how boys and girls behave, and what reactions such behaviour elicits. Very poorly thought through on your part,” was one typical comment.

Another aggrieved viewer said: “It’s very telling about that John Lewis advert that even when presenting gender ideology in as adorable a way as possible, it’s still revealed to be narcissistic, destructive, aggressive, misogynistic and thinks women and girls exist to sit quietly and take whatever crap it pulls.”

Reggie’s mother, Sam Parker, has spoken out saying she is “disgusted” at the online trolls for sexualising her son.

In an interview with the Daily Mail, Sam said she was “shocked” the campaign had sparked so much controversy. “It’s laughable. How can anyone be so upset and offended over something fun and innocent?”

“I’ve read comments from people with old-fashioned mind sets who don’t want to see a boy in a dress,” Sam continued. “But what disgusts me are complaints saying the advert is sexualising Reggie, with lipstick and ‘provocative’ dance moves.’ If you see something sexual in an advert with a young boy – you have a problem.”

But John Lewis officials said their decision to withdraw the unpopular ad has nothing to do with the social media criticism.

Regulators with the Financial Conduct Authority (FCA) ruled that the insurance ad might mislead customers into thinking the insurance would cover deliberate damage such as that wreaked by the boy, when it only covered accidental damage.

Many of you have contacted us regarding the thinking behind our latest Home Insurance advert. Please find our response below: pic.twitter.com/lbTqFTSry2

An FCA spokesperson said: “Financial services firms’ marketing must be clear, fair and not misleading”.

This is not the first time that a “woke” advert has rebounded on a retailer.

Back in 2018, craft beer producers BrewDog launched a “pink IPA” beer, labeled “beer for girls” in an attempt to “fight against gender inequality”.

While proceeds went to women’s organisations, many consumers said the concept was “lazy” and a parody of the satirical position the company claimed to be taking.

We’ve created a beer for girls. And it’s pink. Because women only like pink and glitter, right?

Lets show that enough is enough with stereotypes. pic.twitter.com/g1zonXFInm

What did you think of the John Lewis campaign?