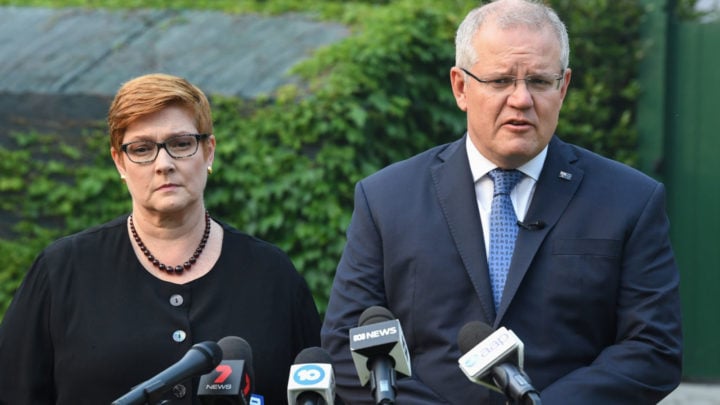 Three Australians are feared to be among the five people who have been confirmed dead following yesterday’s volcanic eruption on White Island in New Zealand’s Bay of Plenty.

Speaking in Canberra on Tuesday morning, Prime Minister Scott Morrison confirmed the tragic news and said that Australian authorities are working alongside those in New Zealand to confirm the identities of those who have been transported to hospital, some of whom have suffered very serious injuries.

The PM also confirmed that there were a total of 24 Australians, aged between 17 and 72, involved in the incident with 11 of those people currently classed as missing, while 13 others are in hospital.

“With 11 Australians unaccounted for, three of those feared to be amongst the five that have already been identified as deceased,” Morrison said. “This is a very hard day for a lot of Aus families whose loved ones who have been caught up in this terrible, terrible tragedy.”

Morrison went on to say that he spoke to NZ Prime Minister Jacinda Ardern earlier today who assured him that the operation is now in “recovery phase”, with four helicopters conducting assessments of the scene. He added: “As NZ Police said last night, there is not considered to be anyone on that island that remains alive.”

Foreign Minister Marise Payne also spoke to reporters this morning, adding: “I want to express our deepest sympathies and thoughts to all of those who are affected and who have families and friends who may be affected by this awful tragedy.”

She went on to confirm that the Australians who have been hospitalised are being treated in various hospitals across the North Island, all of whom have been visited by consular staff.

Minister Payne added: “I really want to reinforce the prime minister’s statement around the necessity to protect the privacy of families while these difficult processes of exactly understanding who is where and endeavouring to make identifications goes on. It does not help to speculate at these times and it is very, very difficult for the families.”

The identities of the deceased have been speculated about in the media this morning, however they have not yet been confirmed by officials.

Earlier on Tuesday morning, NZ Prime Minister Jacinda Ardern delivered a press conference to provide an update on the situation. She said: “At this stage we can confirm that amongst those currently listed as missing or injured are New Zealanders who were part of the tour operation and tourists from Australia, the United States, the United Kingdom and Malaysia.”

She went on to say that several reconnaissance flights have been carried out over the island since the eruption, with “no signs of life” visible on the surface.

New Zealand PM Jacinda Ardern says amongst those missing after the White Island volcano erupted are New Zealand citizens and tourists from Australia, the US, the UK, China and Malaysiapic.twitter.com/NM5fGQGvTp

The eruption took place at around 2.11pm on Monday afternoon with around 50 people – most of whom were tourists – believed to have been on or around the island at the time.

GeoNet Project DirectorDr Ken Gledhill addressed reporters during a press conference yesterday to answer questions about the scale and impact of the eruption. He said: “It is not a part big eruption, it was almost like a throat clearing kind of eruption. It went up about 12,000 metres into the sky and, so in the scheme of things, for volcanic eruptions, it’s not large but if you are close to that, it is not good.”

Dr Gledhill also confirmed that there had been increased activity on White Island in recent weeks, causing GeoNet to raise the alert level, however he said that experts could not be sure whether there will be another eruption within the next 24 hours, or whether the worst is now over.